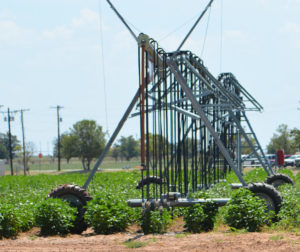 The new project is funded by the Texas A&M Water Seed Grant Initiative and is titled “A Novel Sensor- and Crop-Model-Based Decision Support Tool for Efficient Irrigation Management.”

The app is being developed in the Texas Rolling Plains region, which produces about 13% of the state’s cotton, said Dr. Srinivasulu Ale, Texas A&M AgriLife Research geospatial hydrologist and lead investigator on the project in Vernon.

To sustain cotton production in this region, he said, producers must adopt water-use efficient irrigation strategies.

Design and development of mobile app 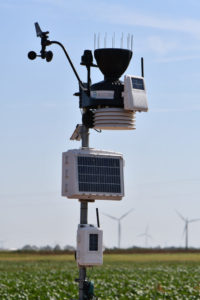 Weather data collected in the field over the growing season will be used to help identify the proper irrigation management strategy.

The project is partnering with the Gateway Groundwater Conservation District, Quanah, and the Rolling Plains Cotton Growers Inc., Stamford.

“Our goal is to deliver a product to cotton producers that can greatly improve their irrigation management, but is simple and accessible,” Adams said.

Most irrigation support tools have limitations that make them less useful to producers in some way, he said, and this project’s goal is to improve upon existing technologies using a novel approach.

“Our app will collect crop information from sensors mounted on center pivot systems, use weather data from online sources, and provide a number of potential combinations of real-time updated deficit- or full-irrigation schedules and economic outcomes,” Biggers said. “Producers can choose an irrigation strategy that best suits their well capacities and expected returns.”

This field information will be used in conjunction with the historic and projected short-term future weather data over the growing season in crop and economic models to estimate projected cotton yield, irrigation levels and net returns under different irrigation management strategies.

“To our knowledge, none of the existing apps use projected short-term weather forecasts in generating real-time irrigation schedules, and our proposed app does that,” Ale said.

ADVERTISEMENT
Once validated using data from a field experiment, the proposed system will be further evaluated by selected producers under different crop conditions, soils, irrigation capacities and weather.

Wall said their plan is to have the app developed by the end of this year, test it in producers’ fields in 2021 summer, and release it in fall 2021.

Kimura estimates if producers adopt the tool on 200,000 acres of irrigated land in the Rolling Plains, it could potentially save millions of gallons of groundwater and extend the economic life of the Seymour Aquifer.

“But we don’t think its viability will be limited to the Rolling Plains,” Ale said. “We expect the proposed system to allow modifications to include other row crops and for use in other crop production regions of Texas and beyond.”

Kay Ledbetter is a Texas A&M AgriLife communications specialist based in Amarillo. She may be reached at skledbetter@ag.tamu.edu