A native of Leland, Mississippi, Guthrie grew up on a family farm. She graduated from Mississippi State University with a bachelor’s degree in Horticulture and a master’s degree in Agricultural Extension and Education. While in graduate school, she studied under cotton geneticist Dr. Bill Meredith at the USDA-ARS Delta States Research Center in Stoneville, Mississippi. After graduation, Guthrie worked for Cotton Grower magazine as field editor, followed by five years as a market news reporter for the USDA-AMS Flue-Cured Tobacco Division.

She was heard daily on regional radio programs with market reports for the area. Guthrie began writing for Cotton Farming in 1992. She became regional sales representative in 1993. She was promoted to national accounts manager in 1995 and associate publisher in 2000. Guthrie served on the executive committee of the National Agri-Marketing Association for three years, and she participated in the program committee for the Cotton Foundation. She became vice president/publisher in 2005.

Smith, former editor of Mid-South Farmer and Louisiana Farmer magazines, has also worked at Cotton Grower magazine during her long and distinguished career.

A native of Ferriday, Louisiana, Smith grew up on a family farm where her father grew cotton, soybeans, wheat and sorghum. She has lived and worked in the Mid-South throughout her magazine writing career and has covered and written about all crops grown in this production region. 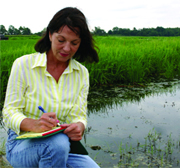 Amanda Huber has been the editor of Peanut Grower magazine since 1999 and Southeast editor of Cotton Farming since 2000.

Huber’s experience in the peanut industry began in 1992 when she served as executive director of the Florida Peanut Producers Association. Through this experience, she gained a knowledge and understanding of the industry by being involved in various issues and events, including the 1996 Farm Bill.

By continuing to be actively involved in the industry, Huber is better able to identify topics and provide news stories to fulfill the mission of Peanut Grower. She also attends meetings and field days to provide news and information for Cotton Farming. 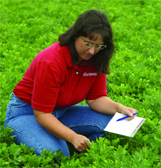 Her current occupation combines two of her passions: agriculture and writing. Huber now lives on the family farm in Bronson, Florida, where she grew up.