How To Manage Pigweed Effectively 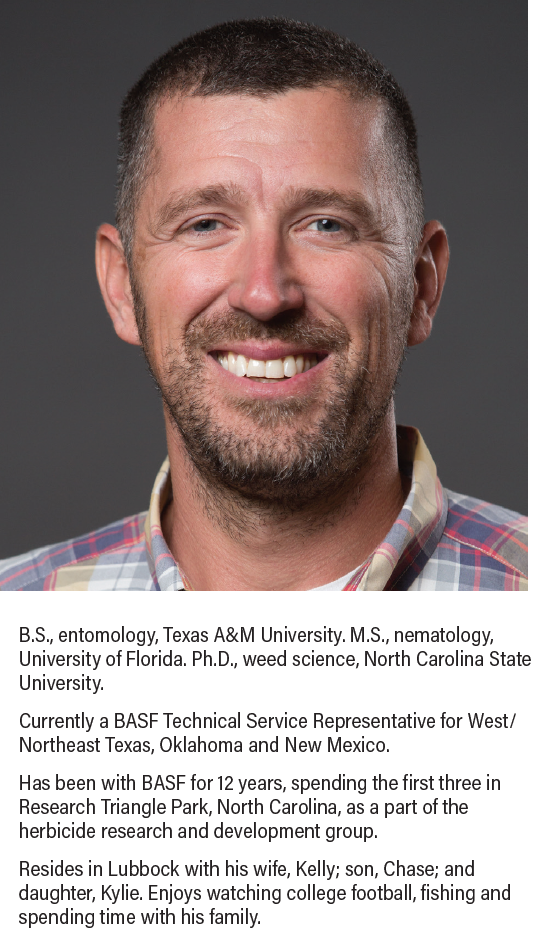 I grew up in central Texas surrounded by agriculture. While attending Texas A&M University, I was a scout for the county Extension agent one summer. I learned what it took to grow cotton and enjoyed interacting with growers, which is still the best part of my job today.

In many fields, glyphosate-resistant Palmer amaranth (pigweed) is the No. 1 weed pest that competes with the cotton crop. Three pigweed characteristics contribute to its ability to significantly threaten yields. First, the sheer numbers per acre are similar to a swarm of termites attacking a house. One pigweed plant can produce as many as 500,000 seeds. Another problem is that pigweed germinates throughout the growing season. As soil temperatures approach 60 degrees Fahrenheit, it begins to emerge, and flushes continue through the spring and summer. Pigweeds also develop very quickly. Under hot conditions, they’ve been known to grow up to 1 inch per day.

For these reasons, it’s imperative to implement an aggressive, effective weed control program that begins early. The cornerstone of this strategy rests on three BASF chemistries: Engenia® herbicide, Liberty® herbicide and Outlook® herbicide. Each one has a different mode of action, and all three are still effective in controlling Palmer amaranth. Together, they provide a complete weed control program for cotton.

Aggressive Weed Control Program
Engenia herbicide is a postemergence broadleaf herbicide tough enough to control glyphosate-resistant Palmer amaranth. Liberty herbicide is a fast, burndown herbicide recommended for use on weeds 3 inches or smaller, especially if you are in a drier climate in the western part of the Cotton Belt. Outlook herbicide is a very broad- spectrum residual herbicide that controls weeds before they emerge.

In conventional till, we recommend mechanically incorporating a product like Prowl® H20 herbicide prior to planting. Then, come back behind the planter with residual herbicides, preferably with different effective modes of action. If weeds have already emerged at planting, include a contact herbicide like paraquat. To control weeds in a no-till or strip-till system that uses a cover crop or leftover stalks, a good practice is to make a burndown application that includes a residual herbicide. Then apply additional residuals at planting.

BASF has changed the cotton portion of the Outlook herbicide label for maximum seasonal use from 21 ounces allowed per acre to 31 ounces. This increase allows the residual to be used as a split application to spread out risk. It’s important to extend weed control, especially on pigweed that germinates throughout the season. With mixed weed populations present in almost every field, we recommend adding glyphosate to the applications of Engenia, Liberty and Outlook herbicides to round out the weed control program. The aggressive strategy I have described includes four trips across the field, which is a lot. However, I believe this is what it takes for complete weed control to protect yields.

As the 2020 season begins, reflect on what happened last year, make adjustments and develop a plan to achieve success.