I began my career scouting cotton for the Cooperative Extension Service in 1979. While obtaining my degree, I managed the entomology test plots at the Cotton Branch Experiment Station in Marianna. After graduating, I became the research entomologist specialist there. In 1987, I left the station to start Griffin Ag Consulting.

Plant Bugs: Major Pest
In 2014 2014 has been another radical weather year, being cooler and wetter than any year I recollect. We were able to get almost all the cotton planted during the first 10 days of May with very little replant necessary. Cotton grew off slowly and has crept along at a snail’s pace all year. Although maturity of the later cotton is a concern, I constantly tell my growers that I would much rather have mid-80 degree highs and mid-60 degree lows than 75-80 degree lows and 100-plus degree highs.

Plant bugs have definitely been our major pest this year followed by a few aphids and very limited spider mites. Adding Diamond two times to our plant bug applications starting about the third week of squaring really seemed to reduce nymphal buildup. However, incorporating Transform at 2 oz/A, when adjacent corn and milo fields began to mature, was the best decision I made to control plant bugs. Transform was amazing, giving 10 to 21 days control.

Preparing The Crop For Harvest
It is the middle of August at this writing, so I want to discuss harvest preparation. Now is not the time to get plants revved up to produce more squares or bolls in our area. The last effective bloom date has already passed, so we now need to focus on getting the cotton ready to pick as quickly as possible without sacrificing yield or quality. Making PGR applications on late fields is a good idea. 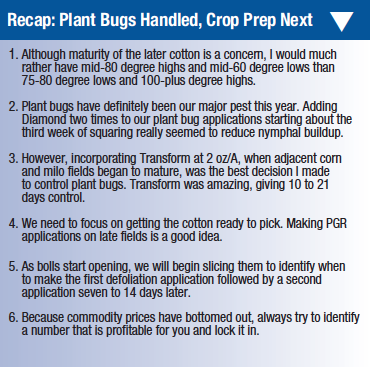 Curtailing irrigation in both amount and spacing is necessary to let the plants naturally senesce and not start greening up again. As bolls start opening, we will begin slicing them to identify when to make the first defoliation application followed by a second application seven to 14 days later. If the bolls five to six nodes down from the terminal are mature, with no jelly or gaps, we will begin to defoliate. I do not base defoliation on percent open bolls. Using my method, I have seen variation from 10 percent open to 70 percent open compared to last effective boll maturity. We have the potential for a very good crop this year and need to start preparing to get it out of the fields.

It is my job as a consultant to ensure my clients’ profitability by keeping abreast of all new technology and incorporating profitable components into their operations. As far as yields go, I think we have the potential in some areas to make as good a crop as we had last year, and it was the best we ever had. However, because commodity prices have bottomed out, always try to identify a number that is profitable for you and lock it in.