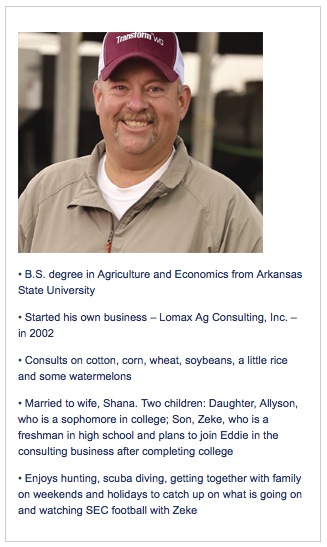 In 1984, when I was fresh out of high school, I had the opportunity to work with Dr. Ed Kowalski, who, at the time, was with the University of Missouri. About every 10 days, he came down to one of our local retailers, got a group of us together and taught us how to scout for thrips, plant bugs and worms during the pre-Bt days. At that point, I was hooked and knew I wanted to stay in the ag field, which eventually led to starting my own business – Lomax Ag Consulting, Inc. in 2002.

In 2013, the weather in our area took us on a wild ride during the growing season. We were a little late planting, experienced a cool snap around the first of May and had to deal with some seep water issues from the St. Francis River. In spite of this, the crop got off to a pretty decent start, then it turned off hot and dry in May and June. However, once the crop corrected itself and established a healthy root system, we were off and running.

We started picking up some blooms about July 6 or 7, and the crop was showing good boll retention. During July, Mother Nature threw us one of the biggest curve balls I have ever seen. From the last 10 days of July through the first two weeks of August, we got between 11 and 13 inches of rain in my location. We handled the water pretty well, but the cloudy days caused the cotton to throw off fruit. And, around the first of August, the temperature at
daylight was 54 degrees.

We had to make up the lost heat units on the tail end, so our crop was not early. Surprisingly, the cotton was resilient, and, in many places, yields were a little bit better in 2013 than they were in 2012.

In addition to yield results, insect pressure was fairly light last year, and we did a pretty good job of controlling pigweed with residuals. Everyone understands the importance of the herbicide layering process. We start with residuals at burndown during the latter part of February and the first of March. We come back two weeks before we plant and lay down another application, then many times we run a residual right behind the planter.

We put out another residual when the cotton gets to the one- to twoleaf stage. Usually, when cotton is at eight or nine leaves, we will apply a residual one more time. There are probably four to six residual applications laid down during the year up here. Later in the season, if we get weed escapes, we call in the chopping crews.

As far as the upcoming season, I think our cotton acres will probably increase. Good cotton ground is going to have cotton on it. If there is one commodity out there that can buy acres, it will be cotton. A lot of the variability has been taken out of raising a cotton crop. We have the genetics, and we know a lot more about our fertility, weed control and insecticide programs.

My goal as a consultant is to keep the crop clean and get it out of the field before deer season gets here. I want all of my farmers to be able to stay in business and be profitable from one year to the next.