Throughout the year, the National Cotton Council was very persistent in seeking congressional support for much-needed disaster and recovery assistance.

How did the NCC push for this?

■ Recognizing the critical need for timely assistance for those who were devastated by Hurricanes Florence, Michael and other natural disasters in 2018 and early 2019, the NCC worked closely with Cotton Belt congressional members’ offices week in and week out.

Specifically, the NCC worked with a coalition of other agricultural groups. The coalition sent letters early in the year to Reps. Sanford Bishop (D-GA) and Austin Scott (R-GA) in support of their amendment to House-approved legislation that ensured about $3 billion would be appropriated into U.S. Department of Agriculture’s Wildfires and Hurricanes Indemnity Program.

What relief does the legislation contain? 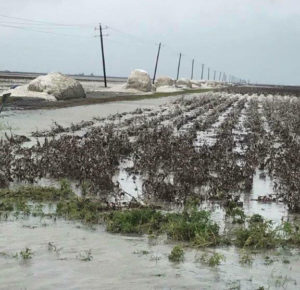 The U.S. Department of Agriculture says a disaster assistance sign-up period for producers could begin in late summer.

■ Crops, including cotton, are covered in the package’s $3 billion for losses in 2018 and 2019. Among causes of loss covered are: Hurricanes Michael and Florence, other hurricanes, floods and tornadoes. Crop losses for 2017 will be covered by a program like the Wildfires and Hurricanes Indemnity Program developed by the USDA.

Producers who receive assistance must purchase crop insurance, if available, for the next two available crop years. For determining crop losses covered by WHIP, USDA will use the higher of the projected or harvest price for crop insurance in determining the expected value of the crop, if there is a revenue insurance policy available for the crop.

It does not require that the grower had to purchase a revenue policy, only that one was offered for the crop. Also, WHIP 2017 now will cover losses from Tropical Storm Cindy in 2017.

The bill also covers a portion of losses from prevented planting by building upon what assistance is provided through crop insurance prevented planting coverage. USDA is working to implement the program as quickly as possible with a sign-up period for producers potentially beginning in late summer.

Which lawmakers were instrumental in the legislation’s passage?