During 2019, the National Cotton Council worked closely with the Administration and Congress to advance passage of a meaningful disaster recovery package.

What were some major NCC actions?

■ The NCC strongly advocated for legislation to provide relief and recovery assistance for producers affected by wildfires, Hurricanes Florence and Michael, and other natural disasters in 2018 and 2019.

Letters of support were aimed at ensuring a total of about $3 billion would be appropriated into the U.S. Department of Agriculture’s Wildfires and Hurricanes Indemnity Program (WHIP).

We also worked with the administration and Congress to get key improvements to WHIP and state block grants as part of the disaster assistance implementation.

The result was the Wildfires and Hurricane Indemnity Program Plus (WHIP+) for 2018 and 2019 crop losses due to hurricanes, wildfires, flooding and other covered disaster events. Instructions for the WHIP+ signup, which began Sept. 11, 2019, along with more information, is at www.farmers.gov. The NCC also posted WHIP+ details and examples on its website at www.cotton.org/issues/2019/upload/19whipsumm.pdf. 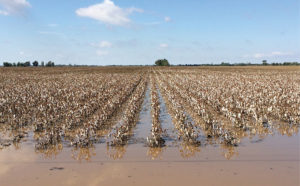 WHIP+ provides assistance for 2018 and 2019 crop losses due to flooding, hurricanes, drought, wildfires and other covered disaster events.

The structure of WHIP+ is very similar to the initial WHIP implemented for the 2017 disaster losses, but there are some key changes in WHIP+. The program is designed to cover between 70% to 90% of crop losses, with the coverage percentage based on an individual producer’s crop insurance coverage level.

Another key change is that the insurance price used to determine the crop’s expected value will be the higher of the projected or harvest price for those producers with a revenue-based insurance policy.

■ Yes. The Further Consolidated Appropriations Act, 2020, extended the availability of unobligated funds that were initially made available for agriculture disaster in the wake of the 2017 hurricanes. After all amounts have been obligated for prior eligible losses, there will be an estimated $1.5 billion remaining for newly eligible losses.

Producers affected by additional disaster events (including drought, excess moisture and quality losses due to a qualifying disaster) are now eligible to apply for aid via WHIP+ for losses in 2018 and 2019.

Drought losses will be eligible if any area within the county in which the loss occurs was rated by the U.S. Drought Monitor as having a D3 (Extreme Drought) or higher level of drought intensity at any time during the applicable calendar years.

USDA is finalizing implementation and sign-up details of the expanded WHIP+ program, and the NCC plans to post key details and examples on its website. In the meantime, more information is at www.farmers.gov/recover/whip-plus.