From NAFTA re-negotiation to China tariffs, the National Cotton Council is communicating with government officials and legislators regarding trade policy issues to ensure the U.S. cotton industry has continued access to key markets.

Is the NAFTA re-negotiation acceptable?

▪ The NCC is pleased the modernization of the North American Free Trade Agreement preserved market access for U.S. cotton exports and established a new chapter for textile and apparel products. This new U.S.-Mexico-Canada Agreement, which President Trump is expected to sign by month’s end, would then go to Congress for consideration. It will ensure continued duty-free access for U.S. cotton and cotton products to Mexico and Canada. This is significant as Mexico represents a top five export market for U.S. raw cotton, and both countries are among the top five markets for U.S. cotton textile and apparel exports.

In addition to maintaining the yarn-forward rule of origin, the USMCA alters some of NAFTA’s tariff-preference levels, cutting some with low utilization rates while raising others with high utilization rates, including cotton and manmade apparel exported from the United States to Canada. The USMCA also includes a provision to discourage Mexico and Canada from negotiating free trade agreements with non-market economies, which is aimed primarily at China.

▪ The United States recently imposed new tariffs on an additional $200 billion in Chinese exports, following two previous rounds of tariffs in July and August against a total of $50 billion in Chinese goods. Tariffs for this third tranche — known as “List 3” — are set at 10 percent, and will rise to 25 percent in January 2019, if no deal to resolve the impasse has been reached by the two countries. 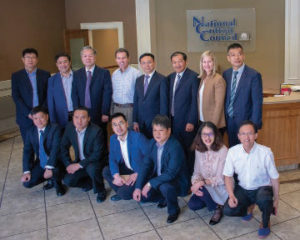 In the face of sales cancellations by Chinese mills, the NCC continues to communicate with the U.S. Department of Agriculture regarding the impacts of these retaliatory tariffs. We were pleased with USDA’s initiation of the tariff mitigating Market Facilitation Program but hope our trading relationship with China can be restored and even improved.

Meanwhile, President Trump has indicated his administration is considering tariffs on an additional $267 billion of Chinese exports, which would essentially cover all Chinese goods being exported to the United States. Bilateral negotiations between senior officials to resolve the impasse have largely broken off, but U.S. officials indicated a meeting could take place between Trump and Chinese President Xi at the G20 Summit.

NCC Chairman Ron Craft and I traveled in June to China where we participated in meetings with U.S. and Chinese officials as part of our ongoing effort to maintain access to China. We emphasized that U.S. cotton is their most reliable and trusted supplier of high quality fiber.