The National Cotton Council (NCC) continues to urge the use of scientific research and local solutions, such as state pollinator plans, as ways to improve pollinator health.

Why is this action necessary?
As directed by President Obama’s 2014 memo, a Pollinator Health Task Force recently released “National Strategy to Promote the Health of Honey Bees and Other Pollinators.” Goals identified were: 1) reduce honey bee colony losses during winter to no more than 15 percent within 10 years; 2) increase the Eastern population of the Monarch butterfly to 225 million butterflies occupying an area of about 15 acres in the overwintering grounds of Mexico by 2020; and 3) restore or enhance seven million acres of land for pollinators during the next five years through key federal actions and pub l i c / p r i v a t e partnerships.

The report noted that multiple approaches, including research, are needed to provide a more comprehensive understanding of both pollinators’ value and ways to prevent their decline. The report calls for an additional $1.56 million in new funding to the U.S. Geological Survey to support research priorities, $1.5 million to EPA to study toxicity and risk management options, $500,000 to EPA to augment work of states and tribes to develop pollinator protection plans and $56 million to USDA for research and associated statistical surveys.

What about the effectiveness of state pollinator protection plans? 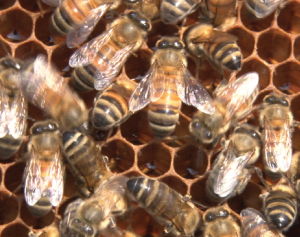 The NCC has strongly encouraged development of state and tribal pollinator protection plans.

EPA, as part of its efforts identified in the National Strategy, published two proposals aimed at mitigating bee exposure to acutely toxic plant protection chemicals. For crops using contract pollination services, the agency believes strong regulatory measures should be in place. Thus, the foliar application of acutely toxic products (based on acute contact toxicity testing) would be prohibited during bloom for fields with bees on-site under contract, unless the application is made in accordance with a government-declared public health response. Language on current neonicotinoid product labels allowing for a 48-hour notification exemption would be removed. Under the second proposal, EPA would rely on state and tribal pollinator protection plans to protect bees that are not under contract for pollination services (cotton, for example) as those have less certainty of exposure concern. EPA would monitor those plans’ success to determine if additional action is warranted.

The NCC has strongly encouraged development of state and tribal pollinator protection plans as a means of mitigation. These plans bring beekeepers and others involved in on-farm plant protection chemical applications together with university experts and state lead agencies to identify local solutions that improve the coexistence of bees and crop protection.

The NCC also identified concerns in the published National Strategy. Among those are EPA’s: 1) analysis of seed treatments similar to their published analysis for soybeans and 2) determination “that the protection of milkweed is consistent with its responsibilities under the Federal Insecticide, Fungicide & Rodenticide Act, and that it will take actions, as part of its regulatory decisions and voluntary programs, to establish practices and requirements to protect critical milkweed resources.” The NCC will continue to work with EPA seeking solutions that do not undermine production agriculture.

Print & Email
2015-08-03
admin
Previous: Power of Persistence Pays Off in Cotton
Next: Growers Remain On Alert For Late-season Pests