The National Cotton Council has escalated its communication with the Administration and Congressional leadership to ensure that U.S. trade negotiators defend U.S. cotton and not agree to any further concessions in world trade talks.

What is the primary concern?
The World Trade Organization (WTO) failed to meet the July 31, 2015 deadline to agree on a work program for the WTO Ministerial scheduled for Nairobi, Kenya in December. However, there have been repeated comments from numerous countries and WTO officials for there to be “something more” done on cotton policy at this meeting. Thus, the NCC has engaged with U.S. trade officials at the WTO in Geneva and in Washington, as well as with Congress, to ensure U.S. trade negotiators maintain a firm commitment not to accept any further restrictions on U.S. cotton policy.

Did you testify before Congress? 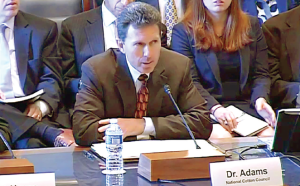 In mid-October, I testified at a House Agriculture Committee hearing on “Foreign Subsidies: Jeopardizing Free Trade and Harming American Farmers.” The Committee wanted to further explore the trade-distorting tools that some countries are using and the detrimental impact on American farmers. I told the Committee that U.S. cotton farmers are indeed competing with international farmers who are benefitting from higher support levels. I cited a recent International Cotton Advisory Committee report that estimated average direct assistance to cotton production across all countries at $0.26 per pound – but only $0.07 per pound average support for U.S. cotton production. The NCC opposes any efforts to further limit U.S. cotton policy in the WTO’s upcoming Ministerial. We believe that the actions already taken by the United States with respect to cotton policy should be more than sufficient to allow U.S. negotiators to resist any further calls for concessions on cotton. I also reiterated U.S. Trade Representative Michael Froman’s comments before the Senate Finance Committee earlier this year that a defensive posture regarding U.S. cotton support is outdated and justifies a shift in focus to other countries’ status regarding their WTO obligations. As such, the NCC will continue to urge U.S. negotiators to push other countries to be as current and as transparent as the United States is with their domestic support notifications.

What about critics of U.S. cotton support?
I stated that our message is simple: U.S. programs are not having a detrimental impact on world markets or producers in other countries. Under the current farm law, U.S. cotton farmers are even more attuned to market conditions. For the U.S. cotton industry to sustain production and infrastructure, it is imperative that production and trade policies in other countries not put U.S. farmers at a disadvantage. I encouraged the House Agriculture Committee and our negotiators to hold firmly to the position that agricultural markets have changed over the past decade, and that U.S. cotton policy has evolved in ways that far exceed the previous demands within the WTO. A cotton specific “solution” focused on developed countries does not address the realities of today’s global fiber markets.