Home » Home Page Feature » West Texas: As Dry As It Gets

West Texas: As Dry As It Gets

Twitter is known for the limited number of characters allowed for messages. However, the social media platform’s required brevity was no hurdle for West Texas cotton farmer Shawn Holladay this spring. As he posted tweets from the field in southeastern Dawson County, there wasn’t a whole lot to talk about that required an abundance of words. “Dry” pretty much said it all.

On June 8, when the dryland fields were so parched that a weed wouldn’t even show its face, Holladay tweeted, “I feel like I’m farming the surface of Mars.” This is an apt description when the dust is flying and all you see is brown all day with nothing green in sight.

“I have a lot of dryland cotton, so we wait as long as we can to plant before we get into an insurance deadline scenario,” he says. “We would rather plant behind a rain because it’s never a good thing when you are out here planting in these extremely dry conditions.

Cotton Farming caught up with Holladay later in the month to get a more detailed report of what was going on out there. Luckily, about 20 percent of his operation is irrigated.

“We don’t have big water, but we can do pretty well with a little help from Mother Nature,” he says. “But right now, the dryland cotton in our area is a complete loss. We recently had just enough rain to sprout and kill the seed, and some fields didn’t get enough precipitation to do that. Typically, the weather is not this dry this time of the year, but everyone will tell you that anything can happen in West Texas, and nothing is ever normal.

“The irrigated crop actually looks good, but as we move into summer, we need Mother Nature to kick in and help us as well. You can’t keep up with a crop good enough to make a profit all by yourself.” 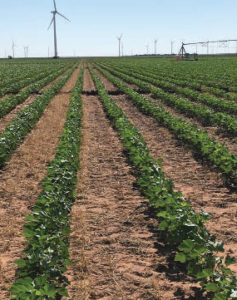 On June 22, Shawn Holladay tweeted
from @holladayfarms: “Irrigated
looking pretty good considering it
has had less than an inch of rain
since April. Gonna need some help
to get over the hump. Forecast
starting tmrw 100+ wind.”

Holladay uses a low energy precision application (LEPA) irrigation system on most of his irrigated acres. This year, he had to apply additional water pre-plant and still had trouble getting the cotton up because of the high winds and more than 100-degree temperatures.

“We were fortunate in that we didn’t have much replanting to do under our pivots,” Holladay says. “A lot of cotton farmers in this area who were not able to achieve a stand because of the timing of the heat and wind had to replant. Irrigation couldn’t keep up with the water demands of the small cotton plant trying to get out of the ground. The seed ruined while they were watering it. We went through five- to six-day stretches of more than 100-degree temperatures, 30 mph winds every afternoon and humidity down to 10 percent or less. It’s hard to make that work.

“When we are trying to get cotton to emerge in a more typical year, we will water an inch or an inch and a quarter per application. But under these conditions, we will water about three-fourths of an inch and try to get around a little faster. There’s really an art to it. If you put out too little, it will dry out.

“But this approach does allow you to get around the field in about four days and just keep the pivots turning until the cotton comes up. Then you can slow them down and start trying to drive some moisture into the ground to get it wet.”

Over the years, every time Holladay changes nozzles, he installs the most efficient nozzle type available.

“We run bubblers on some pivots and just bubble the water out on the ground at very low pressure,” he says. “We do whatever we can to cut down on any evaporation. Once we get a canopy made, we run our nozzle spouts low and try not to put any more water into the air after that.”

Holladay recalls the severe drought that plagued the area in 2011.

“Short term, what we have been experiencing over the past couple of months is not unlike 2011,” he says. “We have no underground moisture, and we are not getting any rainfall. So outside of calling it a true drought, we are as dry as it gets.”

Holladay says the weather forecasters are describing the trend as more normal than dry, which should mean farmers will get some rainfall this summer. However, on June 22, he said a rain is needed in the next 30 days.

“Irrigation is enough to establish a crop, but getting an inch of rain at the right time can make a bale to a bale and a half difference to the acre. There is nothing that makes you look like a better farmer than a good rain.”