The red brick building that stands at 221 North Main St. in Como, Miss., has housed the Taylor family’s business since 1900. What was once a bustling general store with an office tucked in the back is now headquarters for the Taylor’s business enterprises, complete with all the modern amenities.

Today, Sledge Taylor III and his son, David, farm 5,000 acres of row crops – cotton, corn, peanuts and soybeans – as Buckeye Farms, supplemented by cattle and timber. They also have an interest in the Consolidated Gin Co. This diversified operation definitely calls for a healthy dose of teamwork and attention to detail to ensure its continued success. 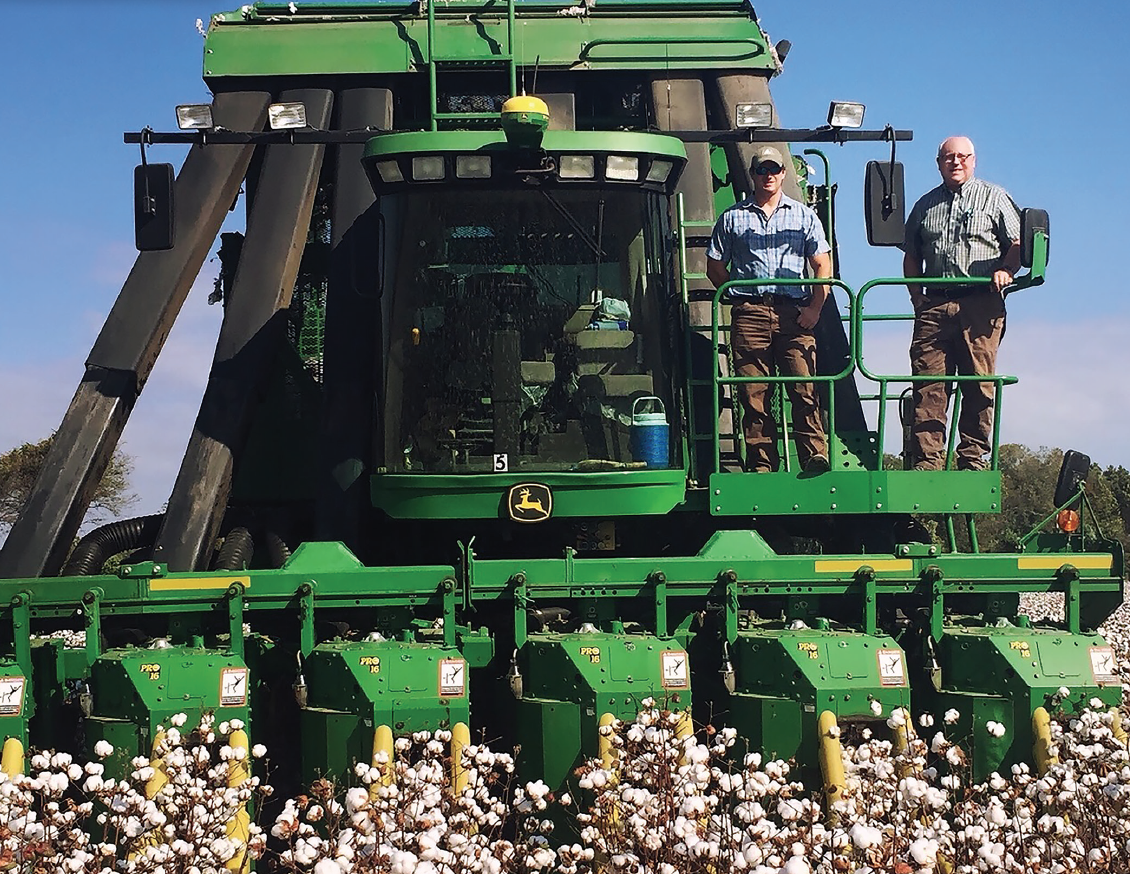 Father-and-son team, David and Sledge Taylor, agree that the new varieties in the marketplace have great yield potential and improved fiber quality.

“My great grandfather operated a cotton gin, so we have been growing cotton ever since the family has been here,” Sledge says. “We have expanded over the years and now operate a farm in the hills and one in the Delta at the base of the bluff on Highway 3 between Marks and Crenshaw. The family has been here in Como for a long time. We have roots here. We love the community, and we like growing cotton. Other members of the family are connected to the farming operation, but David and I make all the day-to-day decisions.”

David points out that his Dad takes care of the office work, such as invoicing and marketing, and he tends to most of the responsibilities in the field. “If he needs my help, I come into the office, and he helps out in the field at times, too,” David says. “In fact, he ran a round-bale picker last fall. We work together to make sure that everything gets done. We are very detail oriented and try to eliminate as many variables as we can to maximize our profits.” 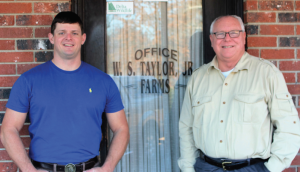 The Taylor family settled in Como, Miss., in the 1850s and set up shop in an office in the back of what was then a general store in 1900. Sledge and his son, David, said the family left the W.S. Taylor, Jr. Farms’ name on the door to preserve the nostalgia

Variety Selection Is Paramount
One of the details that the Taylors take very seriously is variety selection. Every year, they participate in on-farm cotton variety trials with various seed companies and Mississippi State University. In fact, David has been a Deltapine New Product Evaluator for seven years.

In this Beltwide cotton variety testing program, farmers grow Deltapine varieties that have not yet been brought to the commercial market. Deltapine provides the seed, and the NPE growers plant module-sized plots on their own farms in real-world scenarios. These growers farm their NPE plot using the same management practices that they use for the rest of their cotton. At the end of the season, the plots are harvested and ginned at a commercial gin. Throughout the season, the NPE growers make notes about variety performance, including seedling vigor, growth characteristics, plant growth regulator needs, yield and quality. After observing the varieties and providing feedback to Deltapine, the NPE growers then vote on which varieties they would like to see commercialized. The results are announced at the NPE Summit in early December.

The goal of the NPE Program is to determine which varieties have the best potential for success in particular geographies and specific growing conditions. Once that determination has been made, the new “class,” or the varieties that will be released, is announced prior to the upcoming season. This year, the Class of 16 includes DP 1646 B2XF, DP 1639 B2XF, DP 1614 B2XF and DP 1612 B2XF.
“We really like the NPE Program,” David says. “We want to see which varieties are going to do well on our farm. When you find the right varieties that will work for your operation, the extra profit can add up quickly.”

“Both of these NPE varieties had tremendous yields and exceptional fiber quality,” David says. “They were our two best NPE varieties last year and were real close to one another in variety performance and yield. The fiber quality is phenomenal on DP 1646 B2XF. I’ve never seen anything like it. We’re also looking forward to using dicamba with the XtendFlex technology to give us a more effective weed control program. We will continue to have a residual program, but if we have weed escapes because of excessive rain or lack of rain, we can go in with a dicamba product and kill the escapes before they get too big.”

In 2013 and 2014, the father-and-son team reported record yields, and despite some challenges, their 2015 yields were impressive overall.

“In addition to yield, we are seeing improvement in our cotton quality,” Sledge says. “The staple is getting longer, and the strength is better. The majority of our cotton last year was a 37 or 38 staple. The staple on some of the cotton went as high as 40. The uniformity is getting better, too.”

Overcoming Challenges
Although most of the Taylors’ fields looked as if a blanket of snow had fallen across them at harvest time, David says 2015 did have its challenges early in the season.

Sledge adds, “Fortunately, we were able to irrigate some of the cotton that we had to replant, so we could ‘push’ it, and we had a good fertility program. One of the main reasons that the cotton looked so pretty at harvest was that once the first bolls started opening, we didn’t get a single rain. It looked like Texas or Arizona cotton.”

Cotton Fits Well
“We have land that is suited to cotton,” Sledge says. “Cotton is just a good fit for us. And it’s good for rotation and spreading our risk. The more diversified we are, the more we can spread our risk in terms of weather and price.

“We don’t have a production problem in Mississippi. We can grow the best cotton with good yields. In the past few years, price has led to a decrease in cotton acreage across the state, but I think the pendulum will swing back. We may not return to the record cotton acreage that we experienced 10 years ago, but I think we will plant more cotton in the future. We are planning on 2016 being a good year.”