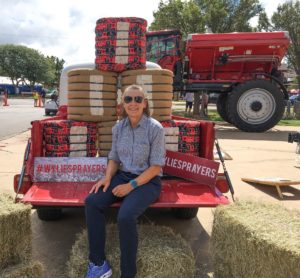 Online encyclopedia Wikipedia defines synergy as the “creation of a whole that is greater than the simple sum of its parts.”

The Internet reference site must have had the Celebrate Cotton Football Game in mind. Through a partnership, Lubbock, Texas-based Plains Cotton Growers and the Texas Tech University Athletics Department have elevated cotton to a national stage and helped reach a diverse audience that otherwise may not be exposed to the natural fiber.

Now in its seventh year, the football game has grown from a gridiron competition to nearly a week of cotton-focused events and meetings. It culminates with the Texas Tech game scheduled early enough in the fall that High Plains farmers haven’t started harvest and can attend.

When the Texas Tech Athletics Department approached PCG more than seven years ago about a cotton tribute game, “We thought it was a very natural fit,” says PCG Executive Vice President Steve Verett. And the partnership has continued to flourish.

“It’s just been a really great opportunity to honor the cotton producers and the cotton industry in this part of Texas and what it means to the U.S. as well,” he says. “There are other college teams that have a rich agricultural heritage. But none of those teams have said, ‘(This game) is going to be about celebrating cotton.’”

“When the relationship started seven years ago, we felt it was just a good way to honor the industry and what West Texas is all about,” he says. “But we’re surprised how well it’s done. We couldn’t do something like this without their support. It’s been certainly very fruitful and successful for us.”

To describe it as merely a football game is a disservice. The parking lots at Jones AT&T Stadium open at noon, and the smell of tailgate barbecue permeates the area. Large pieces of farm equipment from local equipment dealers are scattered around the stadium and in the parking lots. 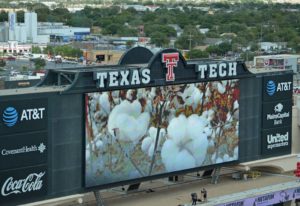 Cotton was prominently featured throughout the Celebrate Cotton Game at Jones AT&T Stadium in Lubbock, Texas.

Signs providing fun facts about cotton, such as “Texas plants 56% of the nation’s cotton acreage,” also dot the landscape.

Fans were asked to wear white, since the game was designated a “white-out.” Looking out over the crowd, it resembled a cotton field after defoliation full of white bolls. In keeping with that theme, PCG, along with several other sponsors, handed out about 4,000 “Celebrate Cotton” t-shirts – 100 percent cotton, of course.

This year, Texas Tech topped the University of Houston 63-49. Even if the Red Raiders had lost, the Celebrate Cotton Football Game still scores a big win for the West Texas cotton industry, Texas Tech Athletics and the city of Lubbock.