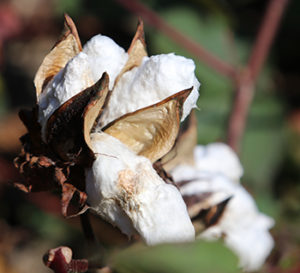 Cotton producers are looking toward harvest in the wake of two major hurricanes that slammed into the Texas and Florida coasts.

Hurricane Irma, though not originally expected to affect Alabama, hit many areas of the state with tropical storm-force winds and heavy rainfall. For some producers, rain was a welcome sight. Other producers’ fields took a battering from strong winds.

Cotton Affected By Hurricane Irma
Strong winds laid cotton plants over in the field in some areas of Alabama. Dr. Trey Cutts said this could present problems for producers as they prepare to defoliate.

“The wind patterns of the storm were very ‘tiger striped,’ so wind impacts were not isolated,” Cutts said. “Isolated heavy rain in spots may have impacted bolls if they were open, but planting dates and maturities also vary so much around the state that giving an estimation of open bolls on a number of acres is very challenging.”
Cotton maturity levels in Alabama’s cotton crop are diverse. He said these factors will vary yield impacts from farm to farm and will be difficult to quantify.

“There is a lot of cotton in the state that has a heavy boll load, but limited root and stalk growth that is laid over and tangled in some fields,” he said. “The storm didn’t have a direct impact of knocking off fruit or lint. However, defoliation that will commence soon will likely be difficult.”

Cutts said running a sprayer through these fields with plants on the ground could potentially knock off a lot of bolls, so airplane defoliation may be the best option in a lot of fields this fall.

The picker headers can adequately pick plants off of the ground at harvest, so this will not be as much of an issue for farmers as defoliation.

Cotton Market Sees A Price Jump
Max Runge, an ACES economist, said the cotton market was preparing for the uncertainty of the weather when producers saw cotton jump to nearly 75 cents per pound.

“In addition to the weather uncertainties, the Chinese market had a policy shift,” Runge said. “The Chinese may not have the massive quantities of stock they had previously. This year they’ve restricted sales to mills that will use the cotton.”
A U.S. Department of Agriculture (USDA) crop production report indicates Alabama yields may be higher than originally predicted in August. But Runge points out this report is based on numbers from Sept. 1, before Harvey and Irma slammed into the coastal U.S.

“As far as Alabama and Georgia are concerned, evaluations continue,” Runge said. “There are some areas where cotton is laid down and this will present challenges for producers. They may see more dockage on quality grade prices.”

Alabama Cotton Crop Update
The most recent USDA crop progress report estimates 52 percent of bolls are open in Alabama. Additionally, the report ranks 14 percent of the 450,000 acres planted in cotton in excellent condition, 52 percent in good condition and 25 percent in fair condition.

Producers are in a much different position than 2016 drought situations. With ample rainfall throughout the growing season, the Alabama cotton crop looks to be a good one.