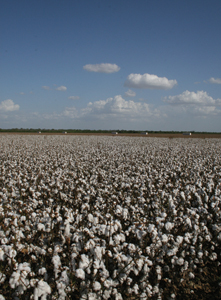 As harvest begins across the Belt, each region faces its own specific challenge as farmers begin the meticulous task of delivering this year’s crop to the gin. Cotton Farming Editor Tommy Horton interviewed four different ag experts in the major production regions to see how harvest has progressed to this point and the strategy that will be used for the rest of the season. The following reports summarize interviews with South Texas county agent Brad Cowan, Arizona Extension cotton specialist Randy Norton, Georgia Extension cotton specialist Guy Collins and Louisiana cotton consultant Tim White.

What’s the best way to describe cotton harvest in a region that encompasses Texas, Oklahoma and Kansas? A quick conversation with South Texas county agent Brad Cowan is probably a good starting point. His territory covers parts of four counties in the Rio Grande Valley, and harvest was completed there in early September.

A total of 88,000 acres was planted, but a serious lack of rainfall caused the area to lose 95 percent of its dryland acreage. For the irrigated acreage, if a farmer had access to water, he had a chance. If he didn’t have access, he had to take a prevented planting insurance loss.

That scenario was probably repeated many times across Texas as producers scrambled to find available water during the third year of a record-breaking drought. In Cowan’s part of the Rio Grande Valley, only 28,000 acres were harvested, but the yields were better than expected.

“You have to remember that we actually have 28 different irrigation districts,” he says. “Some of them are small, and some are large. If the district didn’t have any restrictions on water allocation, it was a normal situation. If there were restrictions, farmers had to find ways to gain access to additional water.”

Cowan says there is no way any farmer could make a crop with only one irrigation allocation. For those farmers fortunate to have enough irrigation water, the cotton crop turned out extremely well.

He says yields were in the three-bale range on the irrigated acreage. Despite the excellent yields, the overall picture wasn’t good in this part of the Rio Grande Valley. More than 140,000 acres were planted in the region in 2012, and, as mentioned, that number dropped to 88,000 in 2013 because of weak cotton prices earlier in the year and looming water shortages.

This will be the smallest crop in the area since 1995, and Cowan is hopeful that producers won’t have to face this scenario again in 2014.

“The message here is pretty simple,” he says. “Water availability is the overriding issue. But I’m still proud of the farmers who were able to deal with all of these problems and make a crop.”

Cowan says this part of Texas can deliver excellent cotton if there is water access and hurricanes stay away in the fall. No small order. As for the rest of Texas, he won’t hazard a prediction, but he says water availability and having enough time for the crop to mature will be the keys.

Based on early reports, it appears that the cotton crop in Arizona will be about average or above average, according to Extension cotton specialist Randy Norton. The earliest harvest occurred in the western part of the state near Yuma, and he says the reports on this early cotton are positive.

In fact, Norton says it was a good year for heat stress and insect pressure. The only insect problems occurring were isolated outbreaks of stink bugs. However, this pest has surfaced for two consecutive years in Arizona, and that is somewhat unusual.

“The majority of the state won’t get started with harvesting until the first week in October,” says Norton. “I have also heard some good news from Extension specialists Steve Wright and Bob Hutmacher in California. They say the crop looks very good out there.”

Norton says water issues will always be a major challenge in California, but somehow producers have persevered and dealt with that problem this year.

Heavy rains that came through Arizona a few weeks ago didn’t affect the state’s cotton. There were still plenty of leaves on the crop, so no damage was inflicted. Norton, however, is quick to point out that, if the rains had arrived three weeks later, it would have been potentially devastating for the Arizona crop.

Norton’s message to Arizona producers is simple and direct. They must be efficient and extremely accurate with their defoliation program. True, there are certain areas of the state where producers will push to gain the last bolls on the top crop. But, ironically, that is more of a tradition that farmers in the state pursue each year. This practice can be expensive, but Norton says it pays off in the long run.

Because of the length of the growing season in Arizona, some producers can wait until December to defoliate and harvest into January and February.

“When producers do this, you know they’re pursuing that top crop,” says Norton.

Due to such a long growing season and ideal conditions, it is no surprise that many cotton seed companies produce seed in this state. That doesn’t necessarily mean cotton production is easy in Arizona. The producer who can monitor crop development and make the most efficient decisions is the person who will deliver the highest yields.

Norton says it is easy to fall into complacency when growing cotton in Arizona. But the good news is that farmers have learned their lessons and know when to defoliate and then move into efficient harvesting.

“I don’t like to see farmers wait too late to defoliate, so that is something that I am always concerned about,”
he says.

To say that Georgia and many parts of the Southeast received an unusual amount of rain this year doesn’t really describe the situation. Georgia Extension cotton specialist Guy Collins says his experience doesn’t go back as many years as some of his colleagues. But, in his career, he has never seen this much rain for Georgia. By late September, his part of south Georgia had received 49.8 inches of rain. That is 22 inches ahead of last year’s total.

“We thought last year was wet, and that’s why it is hard to believe we are 22 inches ahead of 2012. I have never seen anything like this.”

All of the news isn’t bad. Collins says the early planted cotton is “in pretty decent shape.” There are the normal symptoms of boll rot and hardlock, but that is to be expected during any crop year.

During the Oct. 1-4 time period, producers will most likely be making harvest preparations on the early planted cotton, according to Collins. For the later planted cotton, it will still be a wait and see situation. If the late cotton is irrigated, Collins says it will be extremely important to implement timely irrigation so that bolls can be retained. It will also be crucial to have a proactive approach on plant growth regulator applications.

What other kinds of harvest strategies can producers in this region employ? Mainly, it is recommended that the crop be monitored closely for boll development, while simultaneously watching the weather and anticipating the first frost.

One contributing factor that can make a difference for crop development prior to harvest is timely sidedressing. Collins says this helped the late cotton progress to where “it looks a lot better than it did a few weeks ago.”

The bottom line is that the Southeast crop – and particularly Georgia – will have plenty of variability when it’s time to harvest.

“Let me put it this way,” says Collins. “I have seen late cotton turn out pretty well. You need some luck, but I’ve seen it happen before.”

While the rest of the Mid-South has dealt with a late-planted crop and unusually heavy rainfall during August, Louisiana cotton consultant Tim White has observed a different scenario in his state. For the most part, his region has been hot and dry, but harvest is on schedule.

“We simply didn’t get the rain that other areas of the Mid-South received,” he says. “We are dry but had adequate rainfall. Honestly, we didn’t have any major problems.”

The only thing that resembled a problem were isolated pigweed outbreaks and more spider mite infestations. These situations were controlled very well, according to White.

Cotton acreage has dropped dramatically in Louisiana, but it didn’t decrease as much as many had predicted. White says 125,000 cotton acres were planted in the state in 2013. It appears that cotton gained some acres because of the early rains that plagued corn planting in the spring.

Is it possible that more cotton acres could be gained in the future? White doesn’t think that will happen immediately. It would apparently take a drop in corn and soybean prices and higher cotton prices to cause a major shift in the state’s crop mix.

Even though conditions have been ideal for cotton production during the last month, White says the current crop is still late in maturing because it was planted late.

“The strategy in Louisiana is knowing when this crop has matured,” he says. “Then it’s a case of defoliating on time and getting the cotton out of the field.”

In order to harvest this crop in early October in a timely manner, White says it’s critical that Louisiana receive at least 10 days of 90-degree temperatures with lows in the 60s. The weather forecast also needs to be clear of any hurricane threats.

“Right now, I’m feeling pretty good about the situation,” says White. “I realize that things can change quickly, but I’m pretty optimistic at the moment.

“Aside from the weather, I worry about some of our producers waiting too long before they pull the trigger on defoliation. It’s very tempting to wait on that last boll in the top of the plant. My motto is: Don’t lose a dollar waiting on a dime.”