In a cascade of notices, the California Water Resources Control Board told junior water rights holders in the state’s major watersheds recently to immediately stop diverting water. The board says extreme drought leaves the watersheds without enough water to serve all water-rights holders. 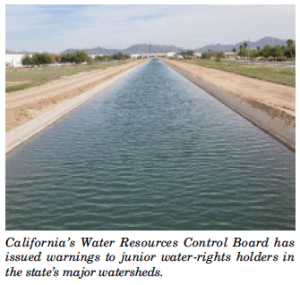 Water-rights holders receiving curtailment notices were given seven days to file a confirmation notice that they’ve ceased diversion to avoid any “unnecessary enforcement proceedings.” The water board says the cutoffs will last until further notice, and warned that water-rights holders in other watersheds and those holding senior rights could face cutoffs in coming weeks. “California farmers and ranchers know better than anybody that rains haven’t come in abundance for the last couple of years,” says Chris Scheuring, California Farm Bureau Federation environmental attorney. “But, as painful as curtailment is for many family farmers, the state board is trying to do its job, which is to administer surface water rights developed after 1914 on the basis of seniority, and curtail junior rights first when there’s not enough water to serve everybody.”

Legal Rights Defined The state’s water-rights system has been established and tested in the courts to arrive at a defined approach to water allocation in times of shortage, he says, “and that’s very important in the current drought, which is among the most severe ever recorded.” But, while the board’s action was not unexpected, Scheuring says, “there are issues of due process, the board’s methods for calculating supply and demand, how it quantifies public trust and public health and safety needs, and how voluntary curtailment agreements already in place will be handled.” Future shortages could be avoided or minimized through construction of additional water storage and appropriate reform of regulations that have limited storage in existing reservoirs, he says.

The water board acknowledged water-rights holders in several watersheds – including much of the lower San Joaquin River Basin and southern delta – are developing local, cooperative agreements to share available water and avoid curtailment. The board says it would consider honoring these voluntary agreements, as long as they don’t result in water being taken from more senior water-rights holders or unreasonably harm fish and wildlife.

The Sacramento Valley curtailments target water diversions in creeks and rivers draining to the Sacramento River and the northern delta. The watersheds where curtailments are occurring include the Pit, McCloud, Feather, Yuba and American rivers, as well as the Sacramento River Delta. From the perspective of water rights holders in the Sacramento Valley, David Guy, executive director of the Northern California Water Association, says curtailments were not unexpected. “We’ve looked at the hydrology and think there’s justification for the post-1914 curtailments,” he says. “But, as we look at supplies and the rights of pre-1914 and riparian water rights holders, it becomes very tricky. I don’t think the state water board has the hydrologic justification for that (additional curtailment) right now.”

Guy says people with water in storage need to remember that previously stored water is not subject to any immediate curtailment. “What this kind of year shows us is that water storage, like in a (proposed) Sites Reservoir, would add a tremendous amount of value,” he said. “If we had Sites online this year, there’s a good chance we’d have 400,000 acre-feet to 500,000 acre-feet of water. Wouldn’t it be nice to have that water sitting upstream right now?”