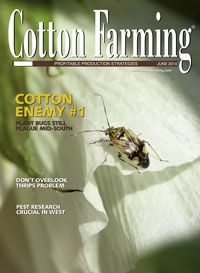 There seems to be a never-ending list of government proposals that would make routine agricultural practices difficult or impossible to perform – and the latest from two federal agencies could bring a raft of new requirements aimed squarely at California family farmers and ranchers.

On April 21, the U.S. Environmental Protection Agency and the U.S. Army Corps of Engineers released a proposed rule that would redefine and expand the scope of waters protected under the federal Clean Water Act. If EPA and the Corps finalize this proposed rule, virtually every area of ground that gets wet or has flow during rainfall could be regulated. Here’s how:

The Clean Water Act regulates “navigable waters,” defined in the statute as “waters of the United States, including territorial seas.” The act leaves it to EPA and the Corps to define “waters of the U.S.” For more than 40 years, the two agencies have tested the jurisdictional limits of the law, by issuing guidance documents and enforcement actions based on ever-broader interpretations of “waters of the U.S.”

This latest proposal would revise regulations that have been in place for more than 25 years and attempt to regulate land use throughout the United States.

For their part, EPA and the Corps claim the proposed rule would enhance protection of public health and aquatic resources while increasing the predictability and consistency of the term “waters of the United States.”

However, predictability and consistency would likely come in the form of expansion to regulate virtually all waters – including most ditches, small and remote “waters,” and natural or man-made drains where water flows only when it rains. The proposed rule would also apply to all tributaries, intermittent and temporary waterways, and wetlands that affect larger, navigable downstream waters, neighboring waters in floodplains and riparian areas. Existing regulations cover only adjacent wetlands, but the rule would expand the term “adjacent” to cover both waters and wetlands. Through its expansion of jurisdiction, the proposed rule would impact California family farms and ranches in multiple ways. 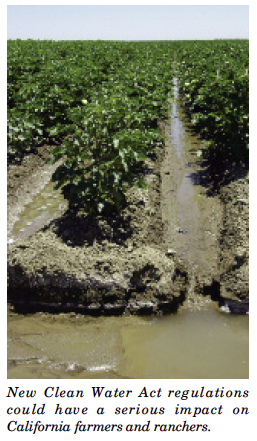 For example, the rule asserts authority over waters or wetlands located within a “floodplain” or “riparian area” of a water of the U.S. These ambiguous terms could result in large areas of farmland falling under newly created federal jurisdiction. Additionally, the proposed rule would include many, if not most, smaller waters and even dry land in the definition of “waters of the U.S.” As a result, permit requirements that apply to navigable waters would also apply to most ditches, drains, small ponds and even depressions in fields and pastures that are only wet when there is rain.

This means a farmer or rancher would likely have to obtain a permit prior to conducting activities such as treating for weeds or insects, disking or pulling weeds. Even if a landowner is able to obtain a permit, farming and ranching would be much costlier, difficult and time consuming. Permits are far from guaranteed, may take months to obtain, and often include paperwork and reporting requirements in addition to those directly aimed at protecting water quality.

Violations of these paperwork obligations carry the same potential penalties as unlawful “discharges” to waters of the United States – up to $37,500 per violation per day. The proposed rule’s expansion of jurisdiction would also make many routine farming and ranching activities vulnerable to lawsuits by environmental activist groups.

In conjunction with the proposed rule, EPA and the Corps also published a rule interpreting the existing “dredge and fill” exemption for normal farming activities. While saying this rule provides clarity for farmers, the agencies have actually narrowed a longstanding exemption by tying it to compliance with what had been voluntary Natural Resources Conservation Service standards.

Kari E. Fisher is associate counsel and Erin Huston is a federal policy consultant for the California Farm Bureau Federation. CFBF previously published this article in its monthly Ag Alert.