Efforts Help Mark the Monarch As Thriving, Not Endangered 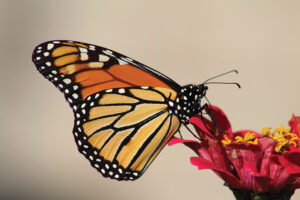 The U.S. Fish and Wildlife Service is currently in the process of evaluating whether to list the monarch as an endangered species under the Endangered Species Act. The agency is required to decide by Dec. 15 — photo by Tinthia Clemant

The monarch butterfly population has declined considerably over the past several decades. Reasons for the decline are attributed to reduced breeding habitat, extreme weather and other factors related to overwintering habitat, pesticides and deforestation in Mexico.

The U.S. Fish and Wildlife Service is currently in the process of evaluating whether to list the monarch as an endangered species under the Endangered Species Act and is required to decide by Dec. 15. Originally, the listing deadline was June 2019, but the date was extended to allow USFWS more time to prepare its Species Status Assessment, as well as collect additional data regarding conservation actions.

In the meantime, there have been efforts by numerous groups to develop approaches to help the monarch and prevent a listing. For example, monarchs were added to the Working Lands for Wildlife program, a partnership effort between the U.S. Department of Agriculture and the Natural Resources Conservation Service.

Through the Working Lands for Wildlife program, farmers and ranchers can voluntarily work with NRCS on implementing various conservation practices on their working lands. Then they can receive regulatory predictability through the FWS for endangered species under the Endangered Species Act. Or in the case of the monarch, ESA predictability should the monarch be listed.

According to Working Lands for Wildlife program, “some conservation practices, such as prescribed burning, could have negative ‘incidental’ impacts to a particular species in the short term but significant benefits in the long term. Landowners who voluntarily sign up for WLFW receive the ESA predictability that they will be exempted from any incidental take of the species caused by the implementation of the program’s conservation practices.”

Currently, the monarch WLWF only covers states in the Midwest and southern Great Plains, but the program could be expanded to other areas of the country where the monarch is found.

Another monarch conservation effort recently approved is a nationwide Candidate Conservation Agreement with Assurances. This is where more than 45 companies in the energy and transportation sectors will commit to conservation actions on utility and energy lands in the lower 48 states where monarch butterflies are found.

The CCAA is also a voluntary agreement that provides participating partners regulatory assurances from USFWS should the monarch be listed.

In working through its approval of the CCAA, the USFWS considered the needs of farmers and ranchers, given that much of the utility and energy infrastructure in the United States occurs on top of, underneath or adjacent to farm and ranch lands. USFWS recognized that farmers and ranchers will be key to the success of the agreement.

Additional information and materials will be forthcoming to help farmers and ranchers understand the new CCAA, including how it will be implemented and its impacts for landowners adjacent to lands enrolled in the new CCAA.

Closer to home, the Arizona Farm Bureau is part of the Arizona Monarch Collaborative, which is made up of representatives of organizations and state and federal agencies. The group was formed to help bring attention to the monarch in Arizona and the various ways individuals, municipalities and industries can help enhance and protect monarch habitat.

More information regarding best management practices that can help protect monarchs (and pollinators) can be found at www.azmonarchcollaborative.com.

Why should we care in Arizona? Maps of monarch migration reveal monarchs from both the Western and Midwestern populations travel through Arizona as they move to and from Mexico. Regardless of whether the monarch is listed, Arizonans can take steps now with conservation efforts.