EDITOR’S NOTE – Texas High Plains producer Shawn Holladay has somehow survived a four-year drought and record rainfall this spring. However, he remains confident that this year’s cotton crop has a chance to survive because of excellent water supplies.

Today, for the first time in five years, I finished planting my cotton into soil that held an ample amount of moisture – and plenty of promise.

Planting expensive cottonseed into dry dirt and hoping for the best, as most of us in Texas have done for the past several seasons, isn’t exactly the optimal way to begin the year. “Game on,” I would say, but deep down, I feared those elusive rain clouds that could force me to walk away once again from my dryland fields and test the limits of my irrigated ones. Those with much more experience than me would say that they hadn’t seen a drought like this in more than 50 years. While true, it wasn’t an encouragement by any means.

“But you have insurance,” people say. Certainly we do, and without it, many of us would have been out of business. These have been the tough times for which the crop insurance program was designed. However, when I plant, I expect to make a crop. Collecting insurance allows me to cover only some of my expenses. Nothing will replace the satisfaction I get from successfully planting, tending and harvesting a product that clothes and feeds people around the world. It is my business. It’s what I do.

What a difference a year can make. We first saw a glimmer of hope in early 2014 when timely May rains gave us a bit of a boost. But by August, we were back to what had become customary – hot, dry conditions, and those lush, green cotton plants just shut down production. Sure, producers in this area grew more cotton in the Texas High Plains region in 2014 than we had since 2010, but an August rain could have made a tremendous difference for many producers. 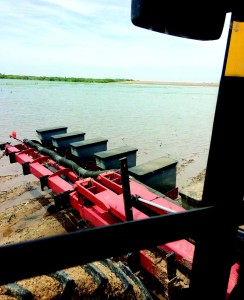 We couldn’t dwell on the “what might have been.” So, we moved on. After all, we were getting pretty used to that sick feeling.

We’d been hearing mixed reports from meteorologists and others who promised an El Niño event, which would bring cooler, wetter weather to our part of the world. Some experts would disagree. Farmers weren’t really sure what to believe anymore.

Looking back, this past fall seemed to be the beginning of a turnaround, although at the time, the thought of possibly coming out of this drought still was farfetched. But few seemed to mind the fall rains that delayed harvest. Old Man Winter also paid us several visits, and I don’t think I’ve ever been so excited about snow. It was a winter like we hadn’t seen in years.

Fast forward to May 2015, which was the wettest May in history for the entire state of Texas. There were only five days in May that the West Texas Mesonet did not record precipitation in at least one of their area stations. Fields and cities were flooded. We were so grateful for the moisture on our farms but were saddened to see such tragedy in some other parts of our great state.

Here on the Texas High Plains, we usually would begin planting cotton around May 1, but the rainfall, although welcome, forced many of our producers to change their game plans entirely. Some had to take prevented planting for the first time ever. Some switched to other crops because they couldn’t meet their planting deadline for cotton. Others pulled out all the stops to cram a month’s worth of work into a week – working 18-hour days, or whatever it took to get the job done in time. Some of our friends in South Texas also didn’t get to plant due to excessive rainfall, and we’re seeing some drastic acreage reductions.

The blessing of rainfall hasn’t been without its challenges. I have had to replant a significant amount of my acreage and have battled soil erosion. These rains have increased our weed pressure, and many producers have dealt with seedling disease. We may well see insects that we haven’t observed in years. Still, we’ll take these challenges in stride as we again deal with extreme situations – albeit on the complete other end of the spectrum. Since September of 2014, I have had more than 50 inches of precipitation on some of my farms.

So do these rains mean the Texas drought is over? According to the U.S. Drought Monitor, the answer is yes, for most of the state. As of this writing, there is no orange, red, or maroon on the Texas map – and that’s a good thing. Less than 10 percent of the state is considered to be in a drought, and even the majority of that area is at the D0 stage – abnormally dry. Compare that to one year ago, when almost 90 percent of the state of Texas was in some stage of drought.

As for me, I’m planting cotton everywhere I can, because that’s what I do. I’m a cotton farmer. But for the first time in five years, I have a renewed optimism. These rains have given us potential. Our soil moisture profile is excellent, even way down deep. It means that we as a Texas cotton industry – family, if you will – have hope that we haven’t had in years. We’re ready for 2015. Game on.

Shawn Holladay is a cotton producer and current president of Plains Cotton Growers, Inc. Contact him via email at slholladay1@me.com.