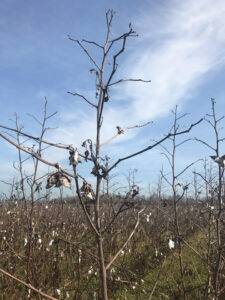 To help avoid leaving the virus inoculum in the field, producers are urged to completely kill all cotton stalks after harvest and make sure winter weeds are controlled prior to planting their next cotton crop — photo by Sudeep Bag, University of Georgia

Since the cotton leaf roll dwarf virus first appeared in Alabama in 2017, it has spread to all Southern U.S. cotton states.

University of Georgia cotton virologist Sudeep Bag says that based on observations from UGA researchers and Extension, CLRDV is present in every county across the cotton-growing region in Georgia.

Further, researchers have determined that the genetic makeup of the virus is different from that of cotton blue disease from South America.

“According to the genetic sequence, this virus is very similar to the virus from Alabama and other states,” Bag says. “However, it is different from the virus transmitted from South America — the cotton blue disease. It may be similar in symptomology, but it is genetically different than the one found in Brazil or Argentina.”

The challenge with CLRDV is that it is not always easy to tell if cotton has been affected. At times, it may be symptomatic or asymptomatic. Symptoms of CLRDV also vary and can range from minor to severe.

Bag says symptoms also may be different depending on the crop’s growth stage.

“If the plant becomes infected early in the season, symptomology includes the reddening of leaves and petioles, a drooping and wilting appearance, and stunting. It is not likely to produce any viable bolls that will yield. Eventually, the plant will die.

“Later in the season, plants may show symptoms that include deformation of the leaves, bunching of the top internodes and a lack of bolls in the upper portion of the plant.”

“The plants showed crinkling of leaves, shortened internodes with no boll retention. The virus has the potential to cause severe yield impact in cotton production.”

Researchers are learning more about CLRDV as quickly as possible, but there are currently no management strategies for before or during the season. However, leaving plants or stalks in the field is also leaving disease in the field.

“Don’t leave that source of inoculum in the field. The virus may be present in the stalks or roots that end up being left in the field,” Bag says.

“This year, we tested 150 different cotton stalks from Tift and Ben Hill counties, and 75% of those overwintering stalks carried the virus. That means if we are leaving the plant or stalk in the field, we are leaving the virus inoculum for the next season.

“The best way to manage CLRDV as of now is to remove the stalk and not have any volunteer cotton remain in the field that will act as a source of inoculum for the next year.”

“We tend to see a lot of weeds around fields. We tested 54 species of weeds and were able to find the virus in 22 different species. Work to control weeds around the field,” he says.

As harvest continues in the Southeast, more will be known about the impact of CLRDV on yield this year. And researchers will assess what has been learned about CLRDV thus far to determine possible management strategies.

University of Georgia plant pathologist Bob Kemerait says, “We will assess the threat and determine what are the appropriate strategies. Cooperation among the researchers, the various state universities, associations that offer funding, such as the Georgia Cotton Commission, and the industry, helps us to get a handle on what growers need to do in the future to remain profitable.”