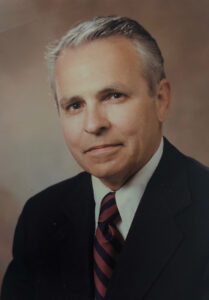 He was born Sept 6, 1917, along with his unexpected identical twin, Leyton, at the Pima Maricopa Indian Medical Clinic in Scottsdale, Arizona, to John Leroy (Roy) Woolf and Anna Louise Stuart Woolf. Siblings Peggy and Robert followed.

Jack’s first job after college was with Anderson Clayton Co., a cotton merchandiser in Los Angeles. With war escalating in Europe, he registered for the draft in early spring 1941. Jack joined the Army and rose to the rank of captain.

As a member of the 204th Anti-Aircraft Battalion, he landed on Omaha Beach as part of the D-Day Normandy Invasion of Europe. Jack received seven battle stars that include the Battles of England, Normandy, Northern France, Holland, the Bulge, the Rhine and Central Germany. He was discharged as a major in December 1945.

After coming home from Europe, Jack returned to Anderson Clayton in Los Angeles. In 1947, he was instructed to go to Mendota, California, to meet with Russell Giffen, who had recently sold his large west-side farming operation to Anderson Clayton.

After watching Jack in action, Giffen realized he had acquired planning and execution skills in the Army — moving large amounts of personnel, equipment and materials — that were well suited for developing a new large-scale farming enterprise. Their 30-plus-year relationship resulted in one of California’s largest and most successful farming operations: Giffen Inc.

In 1949, Bernice McKiney, a young woman from Springfield, Missouri, had a summer job while staying with her cousins in Coalinga on her way to enroll at the University of California, Berkeley. One of her duties was to go to the Giffen headquarters to pick up a check. Jack liked what he saw in Bernice and the two were married months later.

In 1974, Giffen retired from the farming business and asked Jack to sell all the assets. At age 57, he and Bernice decided to “put all their chips on the table” and buy some of the Giffen land to start their own operation, Woolf Farming Co.

Jack proved to be a successful, lifelong entrepreneur. He was involved with several boards and organizations. These included: The National Cotton Council, Huron Ginning, Kingsburg Cotton Oil, the University of Santa Clara Board of Regents, the Fresno Historical Society, Valley Public Television and the California Tomato Growers Association to name a few.

Jack was a proud member of the 16 Club dinner club and the VIP lunch group. Education and healthcare were issues close to his heart. He helped establish a graduate agribusiness program at Santa Clara University and received an honorary doctorate degree from California State University, Fresno. Both institutions offer scholarships in his name.

This article appeared in the August 2020 issue of The Cotton Chronicle, a newsletter published by the California Cotton Ginners and Growers Association.