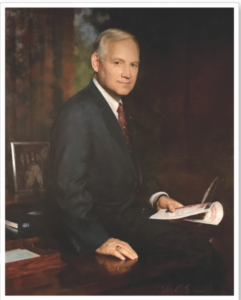 Earl Wayne Sears was a national leader in the cotton industry known for his keen intellect, humble demeanor, long-standing friendships, and devotion to family, community and church.

He passed away on April 3 in Memphis, Tennessee, surrounded by his beloved wife of 69 years, Gwendolyn Moon Sears, and family. Sears died from complications of Parkinson’s disease, which he handled with his characteristic grace. He was 90 and had lived in Memphis for the past 47 years.

Sears served two tenures spanning more than 30 years with the Memphis-based National Cotton Council of America. He was the NCC’s executive vice president from 1978 to 1989. Throughout his career, Sears moved the U.S. cotton industry forward, including expansion of international markets — particularly in Asia.

No matter the many awards Sears received throughout his lifetime, he emphasized the achievements of his colleagues and his core belief that “devotion to service is fundamental to success.”

His 1952 Dawson County Outstanding Citizen Award set the tone for accolades in the years to come, including the National Outstanding Agricultural Award for Public Service from his alma mater, Texas Tech University; and the NCC’s Harry S. Baker Distinguished Service Award. He also received the National Award for Agricultural Excellence from the National Agriculture Marketing Association — in part, for leading the way in advocating innovative Congressional farm legislation. He was inducted into the Cotton Industry Hall of Fame as well.

A native of Brownfield in West Texas, Sears was born and raised on his family’s farm, one of four brothers. His desire for higher education and service was spurred by a bevy of aunts and uncles with doctorates and his mother, Era, who filled the farmhouse with books.

He graduated from Texas Tech University in 1948 with a teaching degree in agriculture, and with a fiancée — Gwendolyn, a Texas Tech nursing student with whom he would spend the rest of his life. Sears immediately started teaching at Lamesa (Texas) High School. There he founded the school’s vocational agriculture program with FFA.

Sears joined the NCC’s field services in 1952 and was appointed southwest area supervisor. He transferred to Memphis and later Dallas and was heavily involved in the formation of the Cotton Producers Institute, out of which grew today’s Cotton Incorporated.

In 1971, Sears returned to the Memphis headquarters and embarked on a campaign of extensive international travel. During his 11-year tenure as the NCC’s executive vice president, Sears’ major accomplishments included a marketing loan for U.S. cotton; improved bale packaging as part of a quality assurance program; advancement of the National Boll Weevil Eradication Program; and major growth in the Cotton Foundation’s research, education and communications programs.

As executive vice president, he also oversaw major growth at the NCC. After retiring in 1989, Sears remained a consultant, coordinating the fund-raising effort for the Cotton Foundation to purchase a Washington, D.C. office building to house the NCC and CCI.

Wherever Sears and wife Gwen have settled, the church has been a central focus in their lives. They also built homes for Habitat for Humanity, served the homeless and generously donated their time and resources to countless projects. Sears and his wife recently announced a major endowed FFA scholarship at Texas Tech, which is in addition to their joint endowment at Southwest Tennessee Community College in Memphis.