Sample Now For Next Season’s Plan

By this point in the season, growers are thinking about all sorts of issues with their cotton crop. Nematodes are probably not top-of-mind unless something is going on in the field that doesn’t quite make sense.

If that’s the case, it’s time to sample if nematodes are a suspected culprit.

“Sampling is most important when you are concerned that a new field may have a problem, or if you are growing a nematode-resistant variety and are concerned that there may still be a nematode problem,” said Terry Wheeler, Ph.D, plant pathologist/nematologist, Texas A&M AgriLife at Lubbock, Texas.

“Later season sampling may also have some value if you are growing another crop and want to check on nematode buildup that may affect the next year’s cotton crop.”

Although there is not much that can be done to remedy the issue in the present, next year is an entirely different story. With an ever-increasing arsenal of nematode-resistant varieties, chemical control options and field management, the opportunities to gain an upper hand on a nematode issue are better now than they’ve ever been.

Beyond generally suspecting a nematode issue in a field, it’s important to identify exactly what species of nematode is present. The two most likely culprits are root-knot and reniform. This knowledge will impact future management decisions particularly as it relates to variety selection, according to Wheeler. 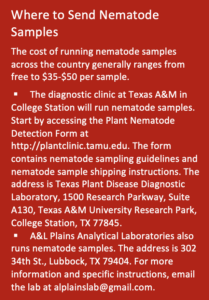 Root-knot nematode covers the most acres in cotton (and peanuts in other parts of Texas) and can cause a low to moderate amount of damage, according to Wheeler.

“Reniform nematode is much more limited in its distribution but can cause 50% to 70% yield loss once it is well distributed in a field,” she said. “This can be problematic, especially if the producer is not doing anything to manage it.”

Battling nematodes often starts with a bag of seed. Today, there are numerous cotton varieties with varying degrees of root-knot and/or reniform resistance.

“With root-knot nematode, there are partially or highly resistant varieties with Deltapine, FiberMax, Stoneville and PhytoGen,” Wheeler said. “Dyna-Gro also has some, but I have not been able to test any to see how well they perform. With reniform nematode, the big news is that there are now several reniform/root-knot nematode resistant varieties that combine resistance to both.”

Those varieties include, but are not necessarily limited to, the following, according to Wheeler:

As always, rotation is a key management option when it comes to nematode issues.

“The only other alternative that I recommend with reniform nematode is to rotate one to two years out of cotton with a non-host like sorghum or corn following each cotton crop,” Wheeler said. “The situation regarding reniform nematode resistance is all upside at this point.

Nematicides In The Mix

As growers consider their options in 2023, supplemental chemical control is always a tried-and-true input in challenging nematode situations and is equally effective on root-knot and reniform.

Brenda Carol is a freelance writer based in San Luis Obispo, California. E-mail her at brenda@carolcommunications.com.

Influencers in Their Fields