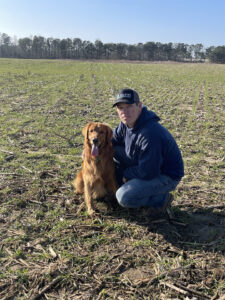 Brad Warren and his golden retriever, Clay, pose on their home place farm that has been in no-till since 1992 — photo by Brad Robb

One of the most pressing issues facing the U.S. cotton industry today continues to be validating U.S. cotton’s on-farm environmental sustainability to buyers and consumers.

“Each year, I look back at the previous growing season, identify what worked, what didn’t work and then do my own research — which includes talking to other farmers in my area — before I pull the trigger on changes,” Warren says.

“From the research being designed and conducted by Cotton Incorporated to the National Cotton Council’s work leading the U.S. Cotton Trust Protocol, providing science-based evidence that our fiber is produced sustainably is critical to marketing our cotton.”

One specific change was implemented in 1991 when Warren’s father bought a no-till grain drill after the commercial launch of Roundup Ready soybeans. The soil on one field close to Warren’s shop on Ten Mile Farm in Faison, North Carolina, has not been turned over since the grain drill was delivered 30 years ago.

“No-till has made a huge difference in my soil health and reducing my operation’s environmental footprint,” Warren says. “The permeability of the soil has improved dramatically. Organic matter left on the field after harvest is beneficial and, over time, the soil has become so mellow.”

Many parts of North Carolina were inundated with rain in 2020. “At one point during the production season we got three 8-inch rains in a row,” says Warren, a New Product Evaluator grower for Deltapine whose 85-acre NPE plot was decimated by a 5-inch rain four days after it was planted.

“The quality of the soil and the cereal rye cover crop helped reduce the risk of huge washes that would usually carry off topsoil and fertilizer into ditches. That’s an environmental plus.”

Warren limits his cereal rye seed to a bushel an acre to keep the long-stemmed plants from getting too thick. The cover crop has proven to be a good investment for him, especially in cotton.

“Thrips tend to leave after burndown. I’ve had cotton on side-by-side fields where one field had a cover and one didn’t,” says Warren, who saw higher thrips pressure in the non-cover cropped field. “I’ve seen the moisture a cover crop holds and reduced weed pressure as well. Fewer weeds have allowed me to eliminate certain control applications and subsequent input costs. There again, reducing my farm’s environmental footprint.”

Another way Warren is saving on input costs and production risks is through new planter technologies.

“I run a 12-row 38-inch precision planter with V-Drive,” Warren says. He is seeing more consistent plant populations and less seed overlap, especially on his smaller irregular-shaped fields and/or when his ground speed changes while planting. “I’m planting anywhere from an additional half-acre to an acre per-planter load because of the electric drive system.”

Two years ago, Warren learned another lesson the hard way when he was planting cotton into corn stubble. “The planter picked up the prescription for the corn, and I planted 10 acres at 27-K plants/acre before I caught the error,” Warren says. He admits he got a good stand nonetheless and harvested 2 bales an acre off the dryland field. “It was one of those years we didn’t get a lot of cold weather after planting, but I’ll never be brave enough to try that again. I was lucky.”

“I’ll be able to adjust the down pressure on my row cleaners from the cab through the system’s air cylinders,” says Warren, who is also considering the company’s Delta Force to improve seed depth control.

“It allows the down pressure to be set from the cab. Once the depth control is set on the gauge wheels, it plants each row at a consistent depth. Farming is ripe with variables and inconsistencies, so it’ll be good to eliminate one — especially in corn where I believe seed depth is critical.”

Giving Back Through Leadership

Another responsibility in Warren’s life is his current role as president of the North Carolina Cotton Producers Association. He presided over the association’s 2021 annual meeting that was recently held virtually.

“Nobody could have foreseen the way this pandemic would impact so many aspects of our lives and operations, but I’m proud to work with our board and David Parrish, who marks his 10th year as CEO,” Warren says.

“Our annual meeting this year came on the heels of Marshall Grant’s induction into the North Carolina Agricultural Hall of Fame. Grant spent years traveling across our state and many parts of the country gaining grower support for what eventually became the Boll Weevil Eradication Program. That man’s vision and dogged determination literally saved the U.S. cotton industry.”

During the NCCPA annual meeting, the Marshall W. Grant Distinguished Professorship in Cotton Extension endowment to the North Carolina State University College of Agriculture and Life Sciences was announced.

“This endowment establishes a cotton Extension position at NCSU in perpetuity,” Warren says. “North Carolina farmers now, and for years to come, will benefit from this endowment and the applied Extension research generated from this position.”