By Garret Montgomery
University of Tennessee

We have conducted research in Jackson, Tenn., on planting into green cover crops, and through trial and error, have found that it can be done effectively. Controlling and properly managing the cover crop are the most important things to consider when planting in a green cover (termination 0-7 days prior to planting). Less than complete control of your cover can cause stunting or stand loss of the cash crop. 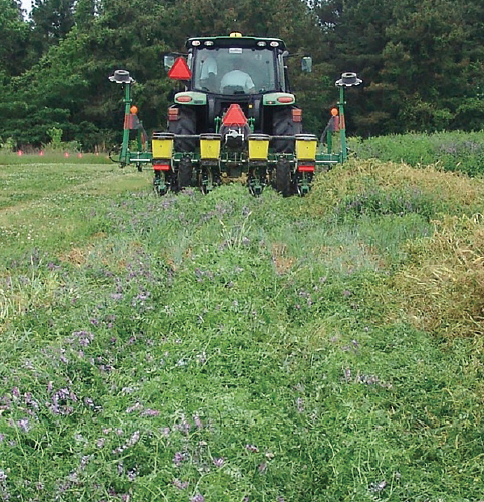 When you are dealing with a single species cereal cover, first determine if you have the ability to roll it down, which makes it more manageable with respect to planting. However, rolling is not effective until the cover has reached dough stage. We have also found that a cereal cover crop that is just beginning to head, but not to the dough stages (Feekes scale 10-11), a roller crimper plus glyphosate can be an effective option for termination and still allow the benefits of rolling.
In Tennessee, dough stage in cereal covers typically occurs late April to early May. At pre-dough stage cereal cover crop termination timings, a herbicide is needed when using a roller/crimper for cover crop termination.With a legume cover crops, we have had better success with herbicide termination.

We predominately examined cereal rye, wheat, hairy vetch and crimson clover, and results are based on studies using these covers for weed control. In general, glyphosate will control cereal covers and paraquat, 2,4-D or dicamba is more effective on the legumes. Herbicide options for terminating/managing a green-planted cover crop vary by crop.

Cotton is a little more sensitive to cover crop termination than soybeans. Legume cover crops, such as hairy vetch, can be terminated at or immediately before planting. If rolling/crimping is an option, terminating a cereal cover can also be delayed until planting. One of the best options for terminating a legume cover in cotton is Gramoxone plus Caparol and/or Cotoran right after planting.