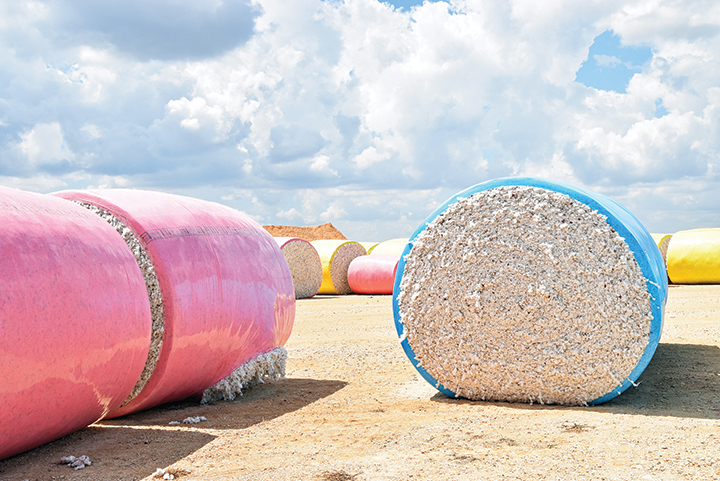 Plastic contamination has long been the bane of the U.S. cotton industry, which prides itself on producing a clean, quality product. Efforts to reduce the problem have redoubled in the past few years as plastic contamination continues to grow, partly due to new round bale technology.

At the center of industry efforts is educating and training farmers and gin employees about ways to prevent plastic from making it to the gin.

“We need to do a better job from the field to the gin point of trying to eliminate any of this plastic from getting into the gin in the first place,” says Tony Williams, executive director of the Texas Cotton Ginners’ Association. “Education I think is the key ­— not just for us as gin members, but it really has to go back to the guy who’s operating that harvest equipment.”

San Patricio County also is home to the U.S. Department of Agriculture’s cotton classing office in Corpus Christi, which had the dubious distinction of having nearly 40% — or 1,587 — of all plastic-contaminated bales in the country in 2019. The Lamesa, Texas, classing office, on the other hand, had only 93 plastic calls.

“We’ve stayed like that during the past two years — nothing has changed,” he says. “I was seeing a sample with plastic every hour. In Florence, they were seeing a sample every shift or possibly even longer.”

“We certainly can’t afford the reputation — that’s my biggest concern — that we become recognized as an area that has a problem with plastic contamination and it affects our ability to market cotton,” Nunley says.

To get to the root of the problem, he surveyed gin members about practices that work and don’t work as well as ideas about how gins and growers could address it.

The No. 1 complaint from the gin respondents was oversized modules — those exceeding 94 inches in diameter — that don’t fit properly on the module trucks. As a result, the plastic wrap may tear or rip during transport or unloading. When the damaged bales are set on the module feeders at the gin, the plastic pieces flow in with the cotton.

Gin respondents also mentioned plastic tails from end rolls of bale wrap, broken modules in the field and placing modules on shredded cotton stalks in staging areas that could rip the wrap.

Not only does plastic sully the industry’s reputation, but it also can affect producers since they ultimately bear the costs, says John Robinson, a Texas A&M AgriLife Extension cotton marketing specialist.

Buyers may discount cotton classed as 71 or 72 by up to 40 cents, paying only 15 to 25 cents per pound. That is if they buy it at all, he says. Some buyers in the past have rejected entire containers because of plastic contamination.

For years, the industry had a minor problem with plastic contaminants, averaging less than 100 calls annually for the entire country. In what some called an eye-opener, every classing office in 2017 had calls for what at the time was termed non-plant contaminants. Of those, 91% were plastic comprising mostly yellow, but also with smaller amounts of pink and black.

Acting to address the issue, the industry called a contamination summit in May 2018. From that, the National Cotton Council developed a 12-part training video in both English (https://youtu.be/5Pja_HbMElA) and Spanish (https://youtu.be/3yY10XyF8mc) aimed at farmers, farm employees, ginners and gin employees.

Unfortunately, contamination numbers have not declined, says Bill Norman, NCC vice president of technical services. The 20 million bale crop in 2017 yielded 2,615 plastic calls. Although the 2018 crop was smaller at 18 million bales, it yielded more than 3,000 calls. And in 2019 with a 19 million bale crop, almost 5,000 bales were classed with plastic contamination.

“This is very frustrating for us that work in this area,” Norman says. “We spent a lot of time and effort to educate and spread the word about the seriousness of this, and here we are seeing calls increase.”

Marvin Beyer, a San Patricio County cotton grower, says clean cotton starts with the producer in the field and extends through to the gin and how its employees handle bales. In the field, producers need to remove any plastic before harvest. They also need to create a smooth staging area devoid of cotton stalks that could puncture the wrap.

In addition, producers need to train tractor drivers who move the bales to ensure they line them up straight, don’t manhandle them and load them carefully onto trucks.

“We have a shared responsibility in this problem and we’re all going to share the consequences as well,” he says.