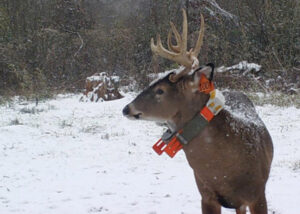 “Where are all the bucks?” Several years ago, Larry Castle, formerly of Mississippi Department of Wildlife, Fisheries and Parks, and Steve Demarais of the Mississippi State University Deer Lab met to discuss what could be done to address deer hunter questions and concerns regarding where bucks were going during hunting season.

For years, Castle and his team at MDWFP received questions from hunters who were frustrated with not seeing the deer they thought they should be seeing. That question is justifiable in this age of trail cameras, meaning you have photographs of a particular buck or bucks, but you can never see them while hunting.

The two deer biologists planned a research project where bucks were fitted with GPS-enabled collars to shed light on the issue.

Over the course of two years, researchers attached GPS collars to more than 40 bucks aged 2 years or older. Buck locations were recorded every 15 minutes throughout deer season.

What deer biologists have known for decades is that deer move every day. Period. Aside from times when a deer may be sick and stays bedded for long periods to convalesce, deer have to move every day to find food. When the data started coming in, it wasn’t surprising to see deer moving every day during both daytime and nighttime hours.

In October and November, about one-third of buck movements occurred during daytime hours. Movements increased to more than 40% during the rut. Also, the daily distance traveled by bucks almost doubled when comparing travel distances before and during the rut.

So as many long-time deer hunters have observed, the rut can be the best time to hunt because bucks are moving more, and a greater proportion of movements occur during daylight hours. The old saying about bucks “going nocturnal,” meaning they only move at night, is just not the case.

Over the years, there have been many magazine articles written about where bucks bed, often referred to as “a buck’s bedroom.” This is a topic we wanted to examine and document.

First, what does a buck’s bedroom look like? Although the type of vegetation differed, structure of the vegetation was consistent. Bucks choose thick vegetation to hide, rest and ruminate. These buck bedding areas can be large areas — on the scale of acres — or smaller areas on the scale of square feet.

What the researchers uncovered and found interesting was the great number of bedrooms bucks have. Many hunters, including myself, figured each buck had only a few secure places on the landscape that he would use for bedding. The researchers were surprised to see that bucks have many bedrooms distributed all over the landscape.

A buck may use 10 or more bedding areas in a single month. This finding was further supported by an analysis where they calculated the distance between the starting and ending location of a buck every 24 hours.

The researchers found that buck locations were typically 900 yards apart every 24 hours during the pre-rut and more than 1,500 yards apart during the rut. Clearly, with this extent of movement on the landscape, a buck needs a lot of bedrooms!

Hunters and researchers also were interested in how far a buck moves each day. As you might imagine by now, it changes over the course of the year. During October and November, bucks averaged about 1,500 yards of movement each day. During the rut, they averaged more than 2,000 yards each day.

So when should you hunt? Whenever you can. The study demonstrated that bucks move every day, and they move during daylight hours. But if you had to pick just a few days to hunt a buck, you have greater odds of seeing him during the rut.

The researchers were just beginning to uncover these important metrics that will be of interest to both hunters and biologists, so stay tuned for more information from this landmark study in Mississippi.

For information about Mississippi’s 2020-21 deer hunting season, go to https://bit.ly/3okhUwT.