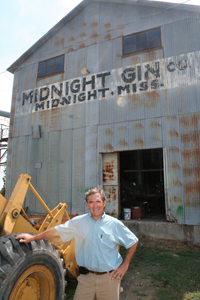 EDITOR’S NOTE: Robert Royal is a farmer-ginner in Midnight, Miss., and is currently serving as president of the Southern Cotton Ginners Association. In this in-depth interview with Cotton Farming magazine, he discusses a wide range of issues confronting the Mid-South ginning industry as well as the entire Cotton Belt.

Can cotton achieve some kind of stability in the next few years?

Since the increase in grain prices that began several years ago, Mid-South farmers have become very good at growing grain crops. They have removed any doubt that corn and soybeans are reliable crops here.

Stability-wise, the farmer is the winner because he now has a menu of cropping alternatives. When cotton will again become a popular crop choice among farmers is anybody’s guess. I hope that this year will mark the low end of Mid-South cotton acreage. I’d say that for the next several years, Mid-South cotton acreage will stabilize in a range between the current low and a high of about two and a half times that low.

How challenging has it been to deal with the cotton acreage reduction?

It hasn’t been so challenging as it has been sad to watch. Somehow, we’ve been lucky enough at Midnight that we have had sufficient acreage to keep the gin running, and we have a plant that still is pretty efficient at lower volumes. Some other gins haven’t been so lucky. They lost their acreage and had no choice but to close their doors. It costs too much to mothball one.

Has the situation created more competition among gins as they try to find customers?

Goodness yes. Nearly every gin is operating well below capacity, so there is considerable competition out there for new customers. There is no written code for competing for new customers. So, it is difficult to be both honorable and aggressive at the same time. I don’t want to be the nice guy who finishes last, but neither do I want to be the cheater who tells lies in order to win.

What are some of the unique challenges for a small gin like yours in Midnight, Miss.?

In the big picture, we’re the same as any gin, factory or farm, large or small. It is Economics 101 – economies of scale and marginal cost of production. However, my own personal challenge is convincing a farmer that he can benefit more at Midnight Gin than at any other gin whether it is large or small, old or new.

In the end, though, what pops out of the bale press is a homogeneous product with a strict set of classing standards, and I never heard of a merchant penalizing a bale due to the age or size of the gin that processed it.

Have you enjoyed being the SCGA president this year?

If memory serves me, my peers first elected me rather sneakily in a meeting that I did not attend. Looking back, I’d have to say the joke is on them because I have thoroughly enjoyed serving. The staff at SCGA is the best, and they make my job very easy. I network with the best and brightest ginners in the Mid-South. Plus, it has brought me into contact with the National Cotton Council and Cotton Board, two fine organizations with great leadership working in our best interests.

Were you encouraged by the obvious optimism shown at the Southern Cotton Ginners summer meeting in Biloxi, Miss.?

Yes. When we ginners get together, we talk shop. In all the conversations I had with my ginner friends in Biloxi, I can attest that the old 4-H motto, “To make the best better,” remains alive in them. I never heard anybody whine about low volume or any other problems.

Are ginners making progress in the proper handling of the round modules and preventing contamination?

Ginners are always making progress. By nature, they are an inventive group. The round module was dumped in their laps, and they were told, “deal with it.” Almost immediately, contraptions began popping onto the scene to roll, lift, spin, undress, slice and dice. Regarding wrapper contamination, I believe that with proper handling and vigilance from field to feeder, it really shouldn’t be an issue.

How important is it to maintain U.S. cotton’s global reputation for consistently producing contamination-free cotton?

A basic structural characteristic for the purely competitive market is a homogeneous product. A 31-3-35 grade from the United States is indistinguishable from a 31-3-35 from any other country. But, that’s only on the sample table and in the economics text book. There is a wild card in the deck, an attribute that is often overlooked at the classing office, and it’s called contamination. U.S. gins and farms have quite a nice reputation for producing clean cotton. It is something we will always take seriously so we can keep our market share.

How concerning is it to see consolidation of ginning operations in the Mid-South?

Actually, it is somewhat reassuring. When two competing operations have shrunk so that both could fold, it is nice that they can come to an agreement and merge. United they stand, divided they fall. It is usually difficult for one side to be willing to close its plant, though. On the one hand, if acreage rebounds, the remaining plant will be unable to handle volume that the two had done separately. So, they make a choice and hope it works out.

How difficult is it for a small gin to implement new technology?

The obvious problem is that the smaller gin produces fewer units to spread costs. So, it must be selective and look for immediate and substantial payoff in whatever it invests. There is no room to waste money on snake oil.

How do you account for the resilience of both ginners and producers these days?

“Momma told me there’d be days like this.” Good producers are typically good businessmen, too. Resilience is a prerequisite because hard times will hit sooner or later.

How often are you asked if and when cotton will make some kind of comeback?

About as often as I am told that it will never come back. I’m betting we’re in the darkest-before-the-dawn period.

If you could convey one message to producers and ginners across the Belt, what would it be?

Hang in there. Things will get better.

Robert Royal farms and gins in Midnight, Miss., in the South Delta region of the state. Contact him via email at rroyal@wildblue.net or by phone at (662) 836-7021.