It’s been nearly 90 years since the last “black blizzard” of the Dust Bowl swept through the Texas Panhandle, a harrowing storm of topsoil and dust that turned day to night and destroyed the livelihoods of countless frontier farmers. But for producers like fourth-generation cotton farmer Barry Evans, the catastrophe is recent history, one that is still shaping a multi-generational cycle of resilience and hope that defines agriculture in West Texas.

“The Dust Bowl was one of the worst environmental disasters the United States has ever had,” Evans says, looking out over broad cotton fields and endless blue skies. “My grandpa would tell stories about having a wheat crop growing and the dirt would start blowing and they couldn’t stop it. The only way they could control weeds was with a plow, and we lost a lot of topsoil during that time.

“I hope to be the generation that changes that. We’re starting to build the topsoil back. It’s a horribly slow process, one that I’ll never achieve in my lifetime. It’s one thing to farm it. What we want now is to make it better.”

An early pioneer of conservation practices in the region, Evans grew up with stories of the Dust Bowl, but he did not start on his own sustainability journey in earnest until the dangers of blowing topsoil arrived in his own backyard. One day in the mid-1990s, Evans’ wife, Lindy, looked out their farmhouse window and pointed out to him that a dust cloud had kicked up over their field.

“Well, she’s a city girl, so I was sure she was mistaken,” he says with a smile. “But she insisted: ‘That dirt’s blowing.’ And I looked outside and in 20 minutes on a Sunday afternoon we had lost our entire crop.”

Shocked by the quick destruction that even a mild dust storm could produce, Evans moved quickly to rethink his practices, looking for adaptive management techniques that would build organic matter while reducing any kind of disturbance on his fragile topsoil. The answer emerged in what was then considered an unusual practice: no-till.

“When I first adopted no-till, it was pretty far out there. Twenty-five years later, we do see the benefits of it and it’s nice to be recognized for that,” Evans says. “The whole impetus was to help stop the dirt from blowing, but what we’ve seen is it also helps us capture rainfall, and now water has become my main focus.”

By eliminating the disturbance caused by tillage, Evans has been able to improve his soil’s structure, reducing the likelihood of surface runoff and allowing water to better infiltrate the soil. This practice is even more effective when married with a diverse crop rotation.

Evans achieves this by planting a high residue crop such as grain sorghum in rotation with cotton, leaving nutrient- dense residue on his soil after harvest. That soil, undisturbed by tillage and covered in organic matter, is able to better capture and retain precious Texas rainfall, reducing the need for irrigation.

“Our water resource issue is the No. 1 limiting factor that we have in our agricultural production for this region,” says Dr. Donna McCallister, assistant professor of agricultural economics at Texas Tech University and one of Evans’ trusted advisers. “We get our irrigation water from the Ogallala Aquifer, and that is a declining resource. So once that water is gone, it’s gone forever.”

For Evans, the knowledge of those limitations has been a powerful motivator to adapt his management towards conservation practices and one reason he is now being recognized for his efforts.

“When we had lots of irrigation water, we could do things differently,” he says. “It was cheap and plentiful. But as the aquifer has declined, every drop is important, and we want to capture that rain. It’s changed my mindset. We’ve got to capture rain and utilize it the best we can.”

“The reason my grandfather’s generation relied on the plow during the Dust Bowl wasn’t because they were ignorant, it’s because it’s all they had,” he says. “It’s up to us now to use the technology to make the land better.” 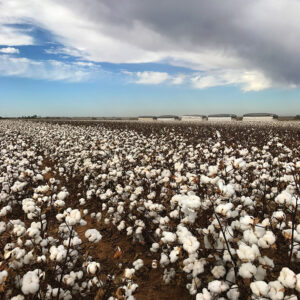 With the availability of these new technologies, Evans has been able to control weeds without destroying organic matter through tillage while increasing his water use efficiency from 60% to more than 95%.

“Barry is a prime example of somebody that understands the environment and is a steward,” says Rick Kellison, Texas Alliance for Water Conservation project director. “If we’re going to survive in production agriculture, we have to be stewards of the land here especially as it pertains to water and soil.”

In 2013, Barry signed on to an initiative at Texas Tech University called the Texas Alliance for Water Conservation, hoping to connect with a cohort of like-minded farmers eager to explore how to efficiently use their limited shared water resources while maintaining profitability.

“Barry has been with us for eight years, and over that time we’ve seen his operation change and grow,” says McCallister, who also serves as one of TAWC’s program managers.

“I think sustainability is so important to Barry because he’s seen his operation change over time. He’s seen a decline in his irrigation capacity and through that, he’s had to make some really hard decisions about how he manages his operation.”

TAWC brings together area producers and industry partners to introduce West Texas farmers to new sustainability technologies and measurement tools, with a goal of extending the life of the Ogallala Aquifer while maintaining the viability of local farms and communities.

Through Texas Tech’s membership in Field to Market, TAWC has relied on the Fieldprint Platform as one of these tools for nearly a decade. This means Evans is one of the longest-standing users of the pioneering sustainability measurement platform.

Harnessing data from their engaged growers in the Fieldprint Platform, TAWC shares research and analysis back to growers like Evans, further strengthening their confidence in making good decisions driven by science.

“I’m going to grow roughly 40 crops in my lifetime, and every year it’s different,” Evans says. “The TAWC project has put together research over a lot of farms over several years. That research is really critical to help me know what I need to do and see not just what works on my farm, but what works for others.”

A Leader And Teacher

Bolstered by data and a dedication to his West Texas farming community, Evans is on a mission to demonstrate to other farmers that environmental sustainability need not come at the expense of profitability.

“One of the things we try to do at TAWC is put the economic component with the technology,” Kellison says. “There’s a lot of different perceived definitions of sustainability, but the first one is if you don’t make a profit, nothing else matters.”

Evans builds on this mantra through his partnership with TAWC, serving as a leader in their peer circle and beyond through leadership engagements at the National Cotton Council, the Texas Grain Sorghum Producers Board and the Texas Agriculture Lifetime Leadership Program.

“What I wish other farmers in Texas and really everywhere knew is that it’s not a trade-off between the environment and the economics,” Evans says. “Anytime you can make your farm better, it’s going to be more profitable. When you look at it that way, you really have a lot of incentive to pick up these practices.”

McCallister says, “Barry is definitely a leader in his community, in the agricultural industry as a whole. He has proven that you can reduce your water use and still maintain your economic sustainability or your profitability over time.”

Kellison says Evans’ legacy will be as a teacher and leader for others.

Almost a century since the environmental crisis of the Dust Bowl hit Evan’s family farm, he is grappling with a very different set of environmental constraints while retaining the same hope and optimism for the future.

“What I would like for other farmers in Texas to see is that we are caring for the soil,” Evans says. “We are making the soil better. We are working to conserve water and to do the best we can with what we have left.”

A Role Model For Success

In a community continually grappling with this set of finite natural resources, Evans hopes to serve as a model for success, while recognizing he is only one part of a greater movement for resilience and adaptation.

Recognized for outstanding conservation efforts on his farm and leadership in advancing sustainable agriculture, Evans was honored as Field to Market’s 2021 Farmer of the Year.

Farming 4,500 acres of cotton and grain sorghum in the Texas Panhandle, he pioneers a resilient approach to dryland farming by balancing dual natural resource concerns of soil and water conservation in the resource-limited High Plains.

The Farmer of the Year Award celebrates Evans’ innovation and dedication to advancing sustainability while grappling with the region’s declining Ogallala Aquifer. This demonstrates to his peers that it is possible to farm profitably and sustainably through an adaptive approach to conservation.

His commitment continues to yield dividends. Evans has reduced his energy use by nearly 80% and improved irrigated water-use efficiency, conserving precious air and water resources while rebuilding three generations’ worth of degraded soil health.

“I have a son who’s starting to farm and he loves the farm he grew up on and now they’re expecting their first child,” he says. “We can farm different than how my dad and my grandad did. The legacy I hope to leave is doing it the best way I can.”

Field to Market contributed this article.