Why Do Farmers Stay With Cotton? 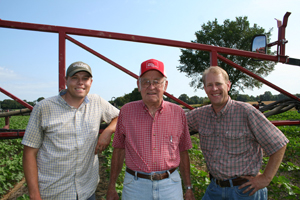 The question is heard across the Cotton Belt today with increasing frequency. What motivates a farmer to keep growing cotton in the face of strong corn and soybean prices? If you talk to enough farmers, you can find a lot of interesting answers.

For West Tennessee producer Jason Luckey and his family, the temptation to chase those grain prices is very real. But after much discussion among Jason, father Rege, brother Ken and nephew Zac, the decision remains the same. They stay with a rotation between cotton, corn, soybeans and wheat – and it continues to work well.

The farm consists of about 4,000 acres with cotton, corn and soybeans each planted to 33 percent of the total acreage. A diversified beef cattle operation is also part of the farm.

“If there is one thing that we do consistently, it’s adhere to a strict rotation schedule with our crops,” says Jason. “We had to vary our plan quite a bit this year because May was a washout for us with the heavy rains. This is an approach that has worked well for us, and we don’t see any reason to change.”

The Luckeys also have a sizable investment in cotton equipment, including the recent purchase of a John Deere on-board, round module picker. To make a dramatic shift away from cotton would mean completely changing their philosophy – and that’s a move they don’t want to make.

No matter where cotton prices wind up, the Luckeys can’t envision radical changes in their planting approach. They have participated in Deltapine’s New Product Evaluator program for several years and pride themselves on having a diverse mix of cotton varieties each year.

For example, this year they have planted the following varieties:

To say that the Luckeys like to plant a lot of different varieties might be the understatement of the year. Keep in mind that the entire farm is dryland because the hilly terrain prevents having irrigation systems.

Several farmers in this part of West Tennessee have started using center pivot irrigation, and the Luckeys continue to weigh their options on such a decision. For the moment, they will continue to analyze the advantages and disadvantages of such a production tool.

The wet conditions during planting season will necessitate some timely decisions for plant growth regulator applications. The Luckeys will also monitor long-range weather forecasts, and that will help determine potential heat unit accumulation and when to defoliate the cotton during the next two months.

This isn’t the first time the Luckeys have dealt with a late-planted crop. Several years ago, they faced a similar situation and didn’t plant cotton until June 15. That crop wound up making 850 pounds per acre and turned out better than the earlier planted cotton.

“It shows that if you know what you’re doing, there’s a way to help that late crop catch up,” says Jason. “That’s what we’re hoping for this year. We just need to be very attentive to this cotton every day from now until we start defoliating.”

It all comes down to the Luckeys’ total belief in a diversified operation, and in their mind cotton has to be a part of the mix every year. The acreage stretches across several counties, and that presents a serious logistical challenge, but “somehow we make it work,” says Jason.

Another important factor might be the family’s love of cotton and the crop’s historical value to the farm.

“I’m the kind of person who loves to walk out in the field and smell that cotton after it’s popped out,” says Jason with a laugh. “I can’t explain it. It’s in my blood, and we love growing it every year. There’s no other way to describe my feelings.”

It Pays To Have A Neighbor Like UT’s Larry Steckel

The Luckey family farm operation has a very interested neighbor who passes by the same cotton fields every day on the way to his office in Jackson, Tenn. Larry Steckel is a Tennessee Extension weed specialist and lives north of Jackson close to the Luckeys.

“I have been friends with the Luckeys for a long time, and I see their fields every day,” says Steckel. “They farm the right way, and I always let them know if I see anything unusual. They really have embraced an effective rotation program with all of their crops.”

Steckel says an effective rotation involving cotton, corn, soybeans and wheat means that “that there are agronomic benefits to each crop when it follows another crop.”

“And I can promise you that the Luckeys know how to deal with weed resistance,” he says. “If I see a weed, I’ll even go dig it up.”