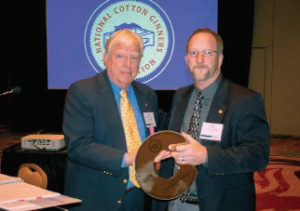 The NCGA recognized Dr. Ed Barnes, senior director for Cotton Incorporated’s Agricultural and Environmental Research Division in Cary, North Carolina, as recipient of the NCGA’s 2018-19 Charles C. Owen Distinguished Service Award. It honors those who have provided a career of distinguished service to the U.S. ginning industry.

In 1995, he joined the U.S. Department of Agriculture’s Agricultural Research Service as an agricultural engineer at the U.S. Water Conservation Laboratory in Phoenix, Arizona. Here he developed uses of remote sensing data for agricultural management, with a focus on water optimization.

Barnes joined Cotton Incorporated in 2002, serving as an associate director of the Agricultural and Environmental Research Division before being named division director in 2007. He serves as an adviser on the National Cotton Council’s Bale Packaging Committee and is a member of NCGA’s Technology Committee.

Barnes has been a member of the American Society of Agricultural and Biological Engineers for 30 years. He served as chair of its Engineering for Sustainability Committee, is a trustee of its foundation and has been an ASABE fellow since 2017. In 2013, he was awarded the National Conservation Systems Precision Agricultural Researcher of the Year Award and in 2014, the ASABE Mayfield Cotton Engineer of the Year Award. 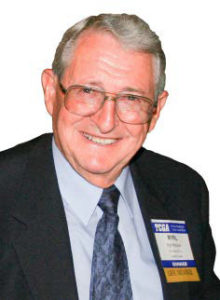 The cotton industry recently lost a dear friend. Myrl Mitchell passed away on Feb. 2. He was born at the foot of Lone Wolf Hill in Mitchell County, Texas, just south of Loraine. Myrl was a cotton farmer and a cotton gin owner for more than 50 years.

He was preceded in death by six brothers and one sister.

The cotton industry can be a small world. Many of us had the pleasure of knowing Myrl and his wife, Mercidine. When talking with someone about West Texas cotton, you could often find common ground in Myrl; it seemed as if everyone knew him.

When you talked about Myrl, it was always positive. I don’t think I ever picked up a negative word about him.

Although not large in physical stature, he was larger than life in both cotton ginning and farming. I cannot think of a time when Myrl and Mercidine did not have a smile on their faces. Both were always upbeat and anxious to talk about cotton or whatever the subject might be. They were simply a pleasure to be around.

Many of you received calls from Myrl over the years. When you picked up the phone, he enthusiastically let you know, “This is Myrl Mitchell from Lenorah, Texas!” I am certain many of you reading this article know exactly what I am talking about. Never missing a chance to try to aggravate Myrl a bit, I would ask, “Who is this?” I don’t think it phased him a bit. We shared a good laugh and carried on from there.

Myrl, of course, would ask how you and the family were doing before getting around to the actual reason he called, which was fine. I don’t care how busy I happened to be, I always had time to chat with Myrl. At the end of the conversation, he would compliment the work we do at the Texas Cotton Ginners’ Association and ask that I pass that on to my workmates. He never missed a chance to thank people for the job they were doing.

Story Behind ‘The Last Honest Ginner’

When TCGA sent out an announcement about Myrl’s passing, we said he was known as the “last honest ginner.” If you were like me, you had probably heard someone refer to Myrl as the last honest ginner at some point or perhaps the “honest ginner.” He just smiled and took it all in stride. That is how Myrl rolled. I always believed the title fit Myrl but did not think much about it. However, I have found there is a “rest of the story.”

It is my understanding that every two years, the U.S. Department of Agriculture meets to create color and leaf grade standards. The event is called the Universal Standards Conference, and all segments of the cotton industry are represented. Myrl was one of many members participating in the process along with other ginners and different segments of the cotton industry. Black boxes that contain the model color and leaf grades are stored in a vault.

After nearly approaching the vault, Myrl realized nobody was behind him. As he looked back, I imagine a roar of laughter followed by someone shouting, “the last honest ginner”! Thus, the phrase “last honest ginner” was coined and followed Myrl from that point on. This may not be exactly what happened, but I think it is close. If you have a better rendition, contact me and I will be glad to publish it in the newsletter next month.

I will miss the infectious smile Myrl brought everywhere he went. I was recently talking to a young lady with the Farm Service Agency in Snyder who happens to have married my nephew. After I told her I work in the cotton industry, she asked me if I knew Myrl Mitchell. Of course I did, and the conversation went on from there. She spoke of how nice Myrl was and how he loved flirting with the ladies in the office, as she put it. That just further confirmed we were talking about the right guy.

Leader In The Cotton Industry

In closing, let’s talk about some of Myrl’s accomplishments in the cotton industry. He served on more local, statewide and national boards than you can count. Myrl was president of Plains Cotton Growers in 1986. From 1992–1995, he served as chairman of the Bale Packaging Committee.

Rest in peace, my friend. We are sure going to miss you!