David Wildy, a diversified row crop farmer from Manila, Ark., has been selected as the overall winner of the Swisher Sweets/Sunbelt Expo Southeastern Farmer of the Year for 2016.

Wildy was named the winner at the Willie B. Withers luncheon held during the opening day of the 2016 Sunbelt Ag Expo farm show. He was chosen as Farmer of the Year over nine other state winners who were finalists for the award.
A full-time farmer since 1975, Wildy is known for his generosity in sharing his farm and its resources with agricultural scientists and researchers from private industry, the University of Arkansas, Arkansas State University and the U.S. Department of Agriculture. 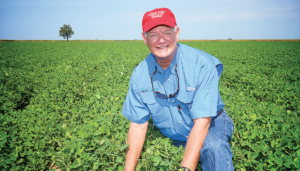 David Wildy farms more than 12,000 acres of cotton, corn, soybeans and wheat. He also is a new grower of peanuts and potatoes and has a small beef cattle herd.

Accolades For Wildy
This is the 27th year for the Farmer of the Year award. It recognizes excellence in agricultural production and farm management, along with leadership in farm and community organizations. The award also honors family contributions in producing safe and abundant supplies of food, fiber and shelter products.

“David is an outstanding representative of our nation’s best farmers,” Ghiloni says. “It is an honor for our company and our Swisher Sweets cigar brand to recognize David and his farm.”

Wildy thanked Swisher and the other award sponsors. He also paid tribute to his wife, Patty, and other members of his family, and how they all support the farm.

“Farming is a tradition in our family,” Wildy says. “And receiving this award is a humbling experience that we will all treasure.”

Wildy Family Farms is a fifth-generation operation started by David’s grandfather in 1914.

The new Farmer of the Year was selected by three judges who visited his farm and the farms of other state winners during early August. The judges this year included Clark Garland, longtime University of Tennessee Extension agricultural economist from Maryville, Tenn.; farmer Thomas Porter Jr., of Concord, N.C., who was the overall winner in 2011; and Charles Snipes, retired Extension weed scientist from Greenville, Miss.

Garland says Wildy impressed the judges with his innovative farm management and crop marketing practices. “David is an outstanding manager of land, labor, production inputs and capital,” he says. “His diversified farming operation features a wide assortment of high-yielding and profitable agronomic crops.”

The judges were also impressed with how members of the Wildy family have been able to strengthen agriculture in the Southeast by sharing their farming resources with the research and education communities.

“Wildy family members hold key positions in this farming business, and they are responsible for much of the farm’s overall success,” Garland says. “They are consistently achieving their short- and long-term strategic farming goals, and these goals involve the entire family.”