Fusarium Race 4 (FOV-4), a serious soil and seedborne cotton fungal disease, has found its way to Texas and threatens upland cotton production with potentially significant yield losses. Cotton breeder Dr. Jim Olvey and others are determined to ensure its impact on U.S. upland cotton will be minimized.
With the help of farmers early in the 2016 season, Jim and his son, Mike Olvey, observed symptoms of FOV-4 in the Texas Upper Rio Grande Valley. By 2017, after speaking with growers and visiting farms in the surrounding area, the Olveys estimate that more than 100 fields have exhibited symptoms of the disease.

FOV-4 first appeared in California in the early 2000s and began affecting the crop in 2005 and 2006 when patches of young plants died, leaving large bare spots within the fields.
Most crops can support and host this disease with no effect; cotton cannot. At this time, there are no effective soil, seed or fumigant treatments. Crop rotations have little effect in slowing down its spread.

California’s Breeding Success
Because of the work in long-staple cotton in California by breeders like Olvey and researchers including Bob Hutmacher and Mike Davis at the University of California, as well as Mauricio Ulloa and Rebecca Bennett at U.S. Department of Agriculture/Agricultural Research Service, tolerance to FOV-4 has been successfully bred into long-staple cotton.

“To successfully combat and control the disease in upland, all seed companies, USDA and university breeding programs need to work aggressively to identify resistance and breed for tolerance,” Jim Olvey says.

Others in the industry are taking steps to ensure the disease can be controlled in upland cotton.
“We realize FOV-4 can have a huge impact on the industry,” says Kater Hake, Vice President, Agricultural and Environmental Research at Cotton Incorporated. “Having seen how the disease has spread in California, and into parts of Texas, we need to make sure we are prepared to handle its potential spread into other cotton-growing areas.”

Hake says the industry has been able to successfully incorporate tolerance and resistance into commercial long-staple varieties. He is confident that resistant upland varieties can also be advanced.

Cotton Incorporated Steps Up
Hake says he believes the issue is critical for the entire industry and will be a focus for Cotton Incorporated’s ag research efforts. The Regional Breeders Trial Network (RBTN) was established by Cotton Incorporated’s Dr. Don Jones, Director of Breeding, Genetics, and Biotechnology with additional coordination by Dr. Ted Wallace of Mississippi State University. It will be key to solving the FOV-4 problem, coordinating programs with USDA, state breeding and the private sector.
Considering the work done by Hutmacher, Ulloa and others in California, including the initial field investigations identifying and evaluating crop responses to FOV-4 in long-staple, the RBTN has a road map of success on which to build the efforts to breed tolerance into upland cotton.

Identification Takes Time
The specific race of Fusarium in the San Joaquin Valley was identified in 2001, Hutmacher says. Confirmations of multiple infested fields began in 2003. Since it takes time for inoculum to build up to crop-damaging levels, it is likely the pathogen showed up in the 1990s.

The extremely small spores of FOV-4 are highly resilient. They can spread easily by cultural practices that move infested soil. This includes cultivation, wind, irrigation with suspended infested soil or plant tissue, equipment movement and seed. A field may initially be infested in only one spot, and under conventional management, it may take several years for farmers or other observers to recognize the disease.

Olvey, who is a partner in a cotton breeding company, O&A Enterprises, screened long-staple cotton for the disease more than 15 years ago. He tested thousands of lines to make the initial selections and then made follow-up evaluations of resistant lines.

Researchers at UC and USDA also began field investigations in the early 2000s, identifying and evaluating crop responses to FOV-4. Their goals were similar to the breeders, trying to identify solutions to the emerging problem in long-staple cotton. It became evident to them in 2005 and 2006 that the FOV-4 pathogen could reproduce to damaging levels in upland/Acala cotton fields.

Long-Staple, Upland Differ
Since the first evaluations, private breeders and UC/USDA-ARS have released long-staple varieties and germplasm with very good to excellent levels of FOV-4 resistance. But genetic evaluations suggest that variety and genetic responses to the disease may differ significantly between long-staple and upland varieties.

The rapid call to action and collaborative effort in California helped the long-staple industry continue to thrive despite the challenges of this disease and years of drought. Consultants, producers and researchers have continued to learn a lot from field observations since then.
“It is important to examine the lessons learned from California with long-staple varieties as Texas and the U.S. now take on the challenge with upland varieties,” Olvey says. 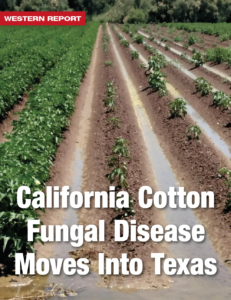 A photo taken on July 11 shows a variety resistant to FOV-4 on the left and a susceptible variety on the right.

Cooperation Is Key
Hutmacher, Ulloa and breeders from seed companies have all used three main assessments in evaluating field performance under FOV-4 pressure: stand loss, vascular root staining, and evaluation of vigor/growth. The challenge is to identify tolerant and resistant sources, and then breed varieties that combine useful levels of resistance with excellent yield, growth habit and fiber quality.
Working in concert, UC and USDA have developed some upland advanced selections that show promise for improved FOV-4 resistance. The California research will continue with the support of California growers and grower organizations. PhytoGen/Dow AgroSciences and Bayer Corp. have similar efforts underway, Hutmacher says.

Olvey emphasizes cooperation and coordination are necessary to combat the current situation with FOV-4. A session on the disease was held at the September Cotton Incorporated Breeders Tour in Chandler, Arizona, bringing together breeders and researchers to discuss the issue. 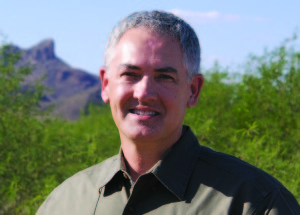 Brent Murphree is the Cotton Board’s Regional Communication Manager for the West. Contact him at bmurphree@cottonboard.org or (602) 810-1171.