Home » Features » For The Children

“A hundred years from now, nobody will remember who I was, what I did or how much money I had. But the world may be a little different and a little better because I was important in the life of a child.” These are the words of Doris “Cousin Tuny” Freeman, a popular Tennessee radio broadcaster and childrens’ show host on local radio and television. Although successful in her career, Freeman is remembered by most as a passionate advocate for abused children and children with disabilities. She is also one of the founders of the Carl Perkins Center for the Prevention of Child Abuse.

Carl Perkins was a Tennessee entertainer, songwriter and international rockabilly star. In addition, he was a civic-minded gentleman and a father with a soft spot in his heart for all children. In 1979, when the Exchange Club in Jackson, Tenn., began its journey to create a center for the prevention of child abuse, Perkins hosted a concert featuring the Statler Brothers that provided seed money to make the center a reality. The first Exchange Club-Carl Perkins Center opened in 1981 and has now grown to 23 locations across Tennessee.

Three of the centers are in Gibson County and have provided services to children and families since 1989. These non-profit entities work with child services, juvenile court and law enforcement. Fundraisers, such as pancake breakfasts, bake sales and a yearly telethon, are held to “keep the doors open” for those in need. Last year, the Gibson County Carl Perkins Center provided services to more than 988 individuals.

Trenton, Tenn., cotton consultants Larry Kimery and his wife, Judy, are long-time supporters of the Carl Perkins Center. One of their favorite ways to contribute is by participating in the Rusty Mac Adopt-a-Teen Program that provides Christmas gifts for teenagers served by the center. A local radio broadcaster, Rusty Mac started the program to honor his son, Seth Adam, who died from complications shortly after he was born. 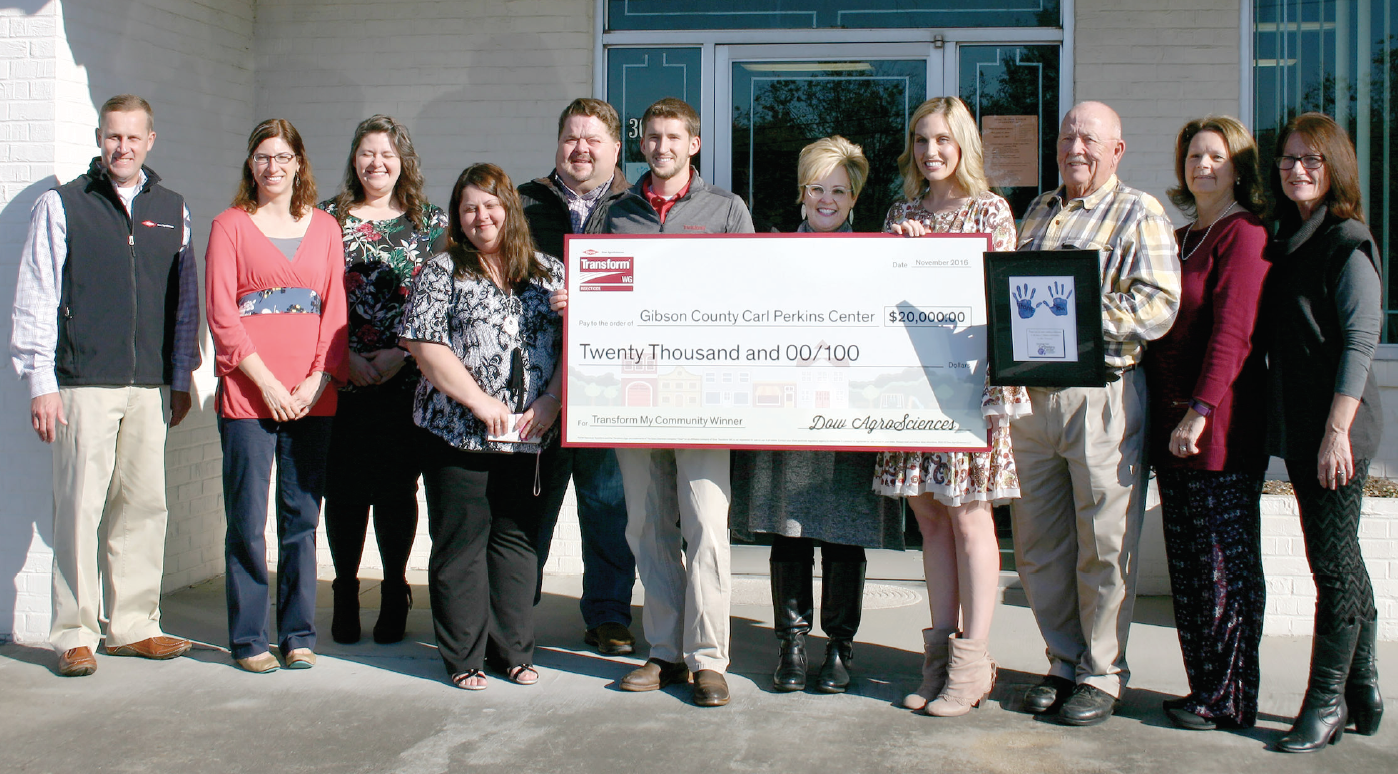 Transform My Community Contest
This past September, Larry learned about another opportunity that — if he won the grand prize — would allow him to provide significant funding to the Carl Perkins Center. Joel Alvey, his Dow AgroSciences sales rep, encouraged Kimery to enter the Transform My Community Contest, sponsored by Dow AgroSciences and Cotton Farming magazine. To enter the contest, cotton growers and consultants were required to submit a short essay about how their community organization could be “transformed” with a donation of $20,000. Entries were judged on compelling need, creativity and tie-in to the Transform insecticide theme.

“I went home, talked it over with Judy and decided to enter the contest,” Kimery says. “I was shocked and thrilled when Joel called to tell me I had been selected as the grand prizewinner. I am proud to have been a supporter of the Carl Perkins Center for all these years, and I thank everyone there for what they do. I also thank Dow AgroSciences for this generous donation that will go a long way to help all the children in need of the center’s services.”

Today, the Carl Perkins Center offers a multitude of programs that require funding to sustain them. Among these services are a 24-hour hot line, victim advocacy, community education, forensic interview, therapeutic visitation and a relative caregiver program.

“It’s hard to put into words what receiving the $20,000 Dow AgroSciences TMC grand prize money means to the Gibson County Carl Perkins Center. We are so very thankful that Mr. Kimery continues to support our center, and believes in what we do. This prize will allow the center to continue to provide quality services and advocate for more children and their families in Gibson County, just when they need it the most. Mr. Kimery is truly making a difference in the lives of children in Gibson County.”

Passionate About Cotton
In addition to contributing to their community, the Kimerys also work hard for their farmer clients.

“Larry and his wife, Judy, are very passionate about the cotton industry in West Tennessee,” Alvey says. “They work hard to help their cotton growers incorporate good pest management practices into their production programs to help maximize yield potential. One thing that stands out to me about Larry and Judy is how fulfilling it is for them to scout cotton. Although it’s hard work, they recognize the important role the cotton industry plays in the community in which they live.

“Dow AgroSciences also is committed to helping cotton growers transform their fields for maximum production. That’s why Transform insecticide, which offers superior plant bug control, is proud to sponsor this contest and support Larry and the Carl Perkins Center who work so hard to help others.”

Lindsey LaBerge, product manager for Isoclast, Dow AgroSciences, agrees. “The Mid-South cotton farming region means so much to the Transform brand. Rural agricultural communities aren’t often given the attention they deserve, but they are the core of our customer base,” she says. “We want to help transform these cities and towns by supporting those organizations actively working to make their communities better.

“We are always blown away by the quality of the entries we receive. It’s great to see how committed and passionate our growers are about serving their communities. It’s also great to hear stories about the positive impact Transform is having on producers’ cotton farms. Larry’s entry really hit home with a lot of us, especially during the holiday season. The Carl Perkins Center is providing a valuable service to its community, and we are thrilled to have the opportunity to substantially impact the center’s work with this award.”

On a day-to-day basis, everyone associated with the Carl Perkins Center deals with the tragic, heart-rending circumstances of child abuse. But thanks to the compassionate, hard-working staff, success stories often emerge, which makes it all worthwhile. As one lady wrote in a letter to the center where she had been taken as a 12-year-old little girl, “I stand before the world today as a testament to what perseverance and drive and hope can do in your life. The center stepped in and gave mine and my siblings’ lives hope and options for a better life. We could at last break the cycle, and we have chosen to.”
Please visit carlperkinscenter.org to learn more about this organization whose goal is to give hope and support to one of the most vulnerable groups in our society — the children.

In addition to Larry Kimery being chosen the grand prizewinner of the Transform My Community Contest, two runners-up were recognized for their outstanding entries. Each one received a $500 donation to his cause.

Clarksdale, Miss., cotton farmer Bowen Flowers submitted his entry on behalf of the Clarksdale Animal Rescue Effort and Shelter. This facility strives to offer endless possibilities for the animal/human bond and transform the negative realities of living in a rural, poverty-stricken town into positives. To learn more, go to http://www.caresclarksdale.com/ and visit Facebook at CARES Clarksdale Animal Rescue Effort and Shelter.

Tim Luckey, who also was named a runner-up, is a cotton farmer in Humboldt, Tenn. Luckey works with an organization called Hunters Sharing the Harvest. Participants distribute deer meat to the shelters and food banks in Gibson, Carroll and Crockett counties to help feed people who are in need. To view the latest news and events, visit Facebook at Hunter’s Sharing The Harvest, Inc.