The Jordan brothers – John, Steve and Mike – are proactive in their approach to cotton production and embracing new technology.

In the midst of challenging weather conditions across much of the Cotton Belt this year, preliminary reports are positive about a new triple-stacked herbicide technology from Monsanto that may help in the fight against weed resistance.

Select producers in the Southeast were able to plant and grow new Deltapine Bollgard II XtendFlex experimental cotton varieties with the trait. Obviously, the new technology hasn’t received regulatory approval from USDA and the Environmental Protection Agency. However, an announcement could occur at any time.

Pending approval, the varieties with the new trait could be available for the 2015 crop season. Monsanto expects to offer the trait in its Deltapine brand seed and to select licensees. The new technology is designed to provide farmers with more consistent and flexible control of weeds – especially glyphosate-resistant weeds such as pigweed. It also has effective tolerance to dicamba, glyphosate and glufosinate herbicides.

Another added bonus is the ability to have up to 14 days of residual activity and the option of dicamba applications before, during and after planting. 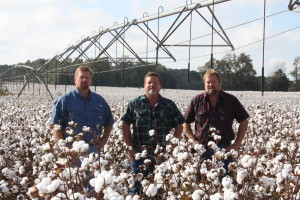 The Jordan brothers – John, Steve and Mike – are proactive in their approach to cotton production and embracing new technology.

The Jordan brothers – Mike, Steve and John – farm in Malone, Fla., but also have acreage in Alabama. Their operation consists of 2,350 cotton acres, 650 peanut acres and smaller acreage devoted to specialty crops such as cucumbers and potatoes.

They took part in Monsanto’s Ground Breakers program, in which producers are provided training on new trait technology and gain firsthand experience with herbicide application requirements. “I like what I’ve seen so far,” says Mike.

“I like the variety, but I also have been impressed by the overall effectiveness of the weed control system. We have been waiting on this technology, and the field has been clean all the way through the season. The farmers are asking for this, and we need it.”

Mike says his neighbors are anxious to know how the new experimental variety has performed, but he won’t have the final analysis until after harvest is finished. Mainly, he’ll answer two questions. How did the new variety perform, and how effective was the weed control component of the program ?

If anybody understands the weed resistance problem, it’s the Jordan brothers. Between all three of the brothers’ farms, they have spent nearly $50,000 on hand weeding in previous years to battle resistant pigweed.

Even with a zero tolerance for pigweed, Mike says it is nearly impossible to have 100 percent clean fields. Ditch banks are ideal places for pigweeds to germinate as well as areas where untimely rains can negatively affect herbicide applications.

Another reason that the Jordans are anxious to have the new Xtend Flex cotton technology approved is because of spiraling production costs. With current cotton prices in the 60 to 67-cent range, it behooves all producers to find new ways to cut costs and be more efficient.

“Like I said, it is encouraging to see what this cotton looks like right now,” says Mike. “It fluffed out really good. I am happy with what I see.”

Impressive Technology
In terms of better yields, Mike anticipates continued increases with the new Xtend Flex varieties. In other words, he doesn’t foresee any “yield drags” caused by the new technology and traits. “I think these varieties are ahead of the game when you compare them to the old days,” he says.

“If I could communicate any kind of message to USDA, it would be that we need this technology. We need it now, and it will affect our ability to produce cotton in the future.”

The Jordan brothers also heartily endorse the Deltapine New Product Evaluator program. By participating, they are allowed to plant new experimental varieties on their farm to see how they perform before potential commercial release at a later time.

This year they planted their acreage mostly to five Deltapine varieties:

Committed To Cotton
Veteran consultant Wes Briggs has worked with the Jordan brothers for several years. He says the key to their success is an ability to “be on time in everything they do.”

“They like to analyze and find ways to be more efficient,” he says. “I have helped them with variable-rate programs, and they’ve had a lot of success doing that.

“I’m not surprised that they are involved in those Xtend Flex experimental varieties. They are looking for ways to deal with weed resistance and improve their farms.”