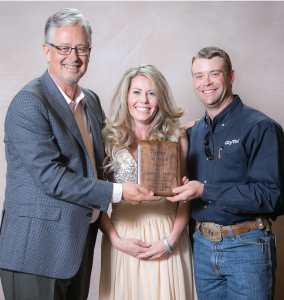 Seven-plus bales was the high.
Cotton yield and quality records are made to be broken, and that’s just what FiberMax cotton growers did in 2015 to qualify for the elite FiberMax One Ton Club. During a celebration in Lubbock, Texas, Bayer recently honored 127 members who qualified for the One Ton Club during the 2015 crop year. The 2015 qualifiers included 40 new members and 87 returning qualifiers, making the total number of FiberMax One Ton Club members 848.

The highest yield for those who qualified for the FiberMax One Ton Club in 2015 – 3,717 pounds, or 7.7 bales, per acre – was recorded on 32 acres by Vance and Mandie Smith, of Big Spring, Texas. The seven-year members of the One Ton Club topped their previous record by 400 pounds per acre. For the Smiths, that’s more than six times the Texas average in 2015, which was 614 pounds per acre.

What makes the numbers posted by the 127 FiberMax One Ton Club members more remarkable is that 2015 was marked by rains that delayed or prevented cotton planting in some areas, notes Jeff Brehmer, U.S. product manager for FiberMax cotton. For many cotton growers across the nation, it was a tough year to make a crop. But for the 40 new members of the One Ton Club, 2015 marked a banner year for their efforts using FiberMax genetics and traits.

“The consistent yields of FiberMax are demonstrated with the growers who come back year after year,” Brehmer says. One FiberMax One Ton Club member qualified for his 10th year and four growers have qualified every year since the club began.

This year’s winners are:

This year’s winner is the Weinheimer family from Groom, Texas. The three brothers and their wives are four-year members of the FiberMax One Ton Club. Oldest brother Pat Weinheimer Jr. and his wife, Kim, took the lead on accepting the truck. Brothers Jarret and Paul shared the award with their wives, Samantha and Lizette, respectively.

“We’re just stoked to win it,” Pat Weinheimer Jr. says. “It’s a sweet thing to win that truck.”
They accepted the truck collectively because they’re partners.

The reason the family farm is still in business has a lot to do with FiberMax varieties; they’ve been planting them since the first year FiberMax was sold. The Weinheimers qualified for the One Ton Club in 2015 with FM 2011GT. In recent years, they also qualified with FM 1320GL.

“These varieties are what have kept us in the game,” Pat Weinheimer Jr. says.

Free Seed Winners
Bayer also drew the names of three farmers, who each received 15 bags of FiberMax cotton seed. The winning growers for that valuable prize were Michael and Mica Durham of Levelland, Texas; Kitten Land Co. of Lubbock, Texas; and Duwane and Bonnie Billings of Seagraves, Texas.
For additional information on the FiberMax One Ton Club, visit www.FiberMax.com/OTC.

Rhea & Kaiser contributed this article on behalf of FiberMax.