Estimated From Days Suitable For Fieldwork

[highlight]Editor’s Note: As Tennessee cotton specialist Tyson Raper says on page 21, the forecast points to increased cotton acreage in 2017. With this scenario in mind, Raper says, “The take-home message is to consider picker capacity now.”[/highlight]

Machine capacity information is crucial for making machinery management decisions. It is used to predict how equipment will perform for a specific farming operation and determines the timeliness of that operation. Machinery capacities have improved over time; however, optimal decisions for planting and harvesting equipment selection remain heavily dependent on climate conditions.

Days suitable for fieldwork (DSFW) were evaluated during cotton planting and harvesting windows for 13 cotton-producing states. Additionally, scenarios for different planting and harvesting equipment configurations were analyzed to give an approximate indication of how many acres cotton producers can realistically expect to cover for each state under various equipment configurations.

These results are valuable to farmers, practitioners, and researchers for decision-making including determining the number of acres that can be planted and/or harvested in a given year. They also are important for farm decision makers when selecting machinery and allocating acreage.

Data Collection
Days suitable for fieldwork data were collected from the U.S. Department of Agriculture National Agricultural Statistics Service (NASS). Data were generally available from 1996-2013, although a few states (Arkansas, Missouri, Mississippi and Kansas) had 30-plus years of data.

DSFW is determined by weather conditions such as rainfall and temperature that influence the condition of the soil surface, thereby affecting the ability of machinery to conduct fieldwork.

Weekly DSFW were collected for 13 of the 17 cotton-producing states. Arizona, California, Florida, and Texas do not have historical DSFW data available. USDA reports DSFW at the Crop Reporting District level for only Kansas and Missouri, and only statewide DSFW for the remaining 11 cotton-producing states. Since cotton production only occurs in relatively small areas of Kansas and Missouri, DSFW for southeastern Missouri and south-central Kansas were chosen rather than state-level data.

The relevant planting and harvesting dates for each state were selected from the 2010 USDA NASS Agricultural Handbook, Number 628, as “most active.” Griffin et al. (2015) provide additional details on how DSFW was calculated.

Planter, Harvester Configurations
Tables 1 and 2 represent the parameters used for the different planter and harvester configurations evaluated. Field efficiency represents the percent of the time the machine is in the field actually planting or harvesting (as opposed to turning at the end of the field, or time spent loading seed or unloading cotton). Note that field efficiency does not take into account travel time between fields.

Field capacity indicates how many acres per hour could be covered by the specific machine configuration. A 10-hour day was assumed for planting and reduced to an eight-hour day for harvesting as dew often limits when it can start and end each day in many states. 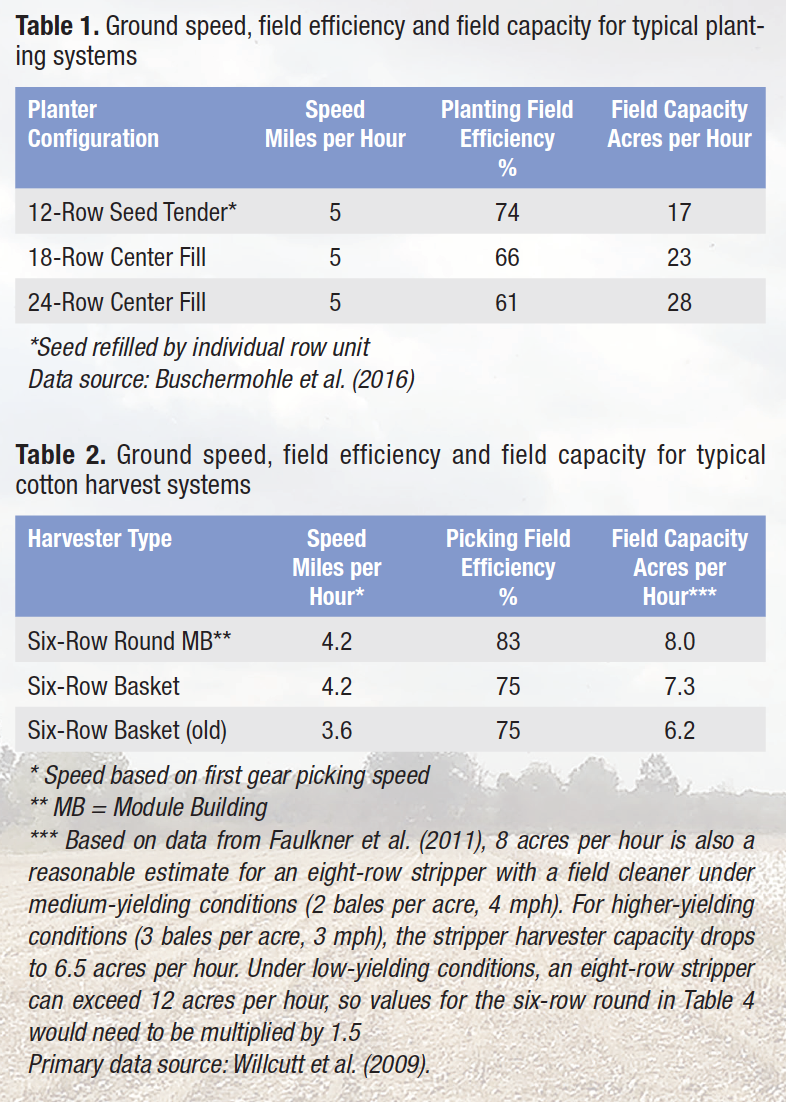 Median Weather Year
Tables 3 and 4 present the planting and harvesting DSFW, respectively, for an average year measured as the 50th percentile or median. It should be noted that “field capacity” is reported for the median DSFW and should be interpreted as an upper limit on the number of acres that can be planted or harvested during the season.

Planning for a median weather year is overly optimistic. And machinery selected based on the median year would not be able to complete field operations 50 percent of the time. Decision makers should plan for a year worse than the median. Additional research is in process to define a worse-case scenario.

Also included in the tables are estimates of how many acres could be covered for a specific machine configuration during a typical (median) weather year. Note that additional data analysis has shown that days for fieldwork definitely vary on a yearly basis. In worse-case scenarios (20th percentile of DSFW), expect a reduction of approximately 300 acres or more in a season for a given machinery configuration. 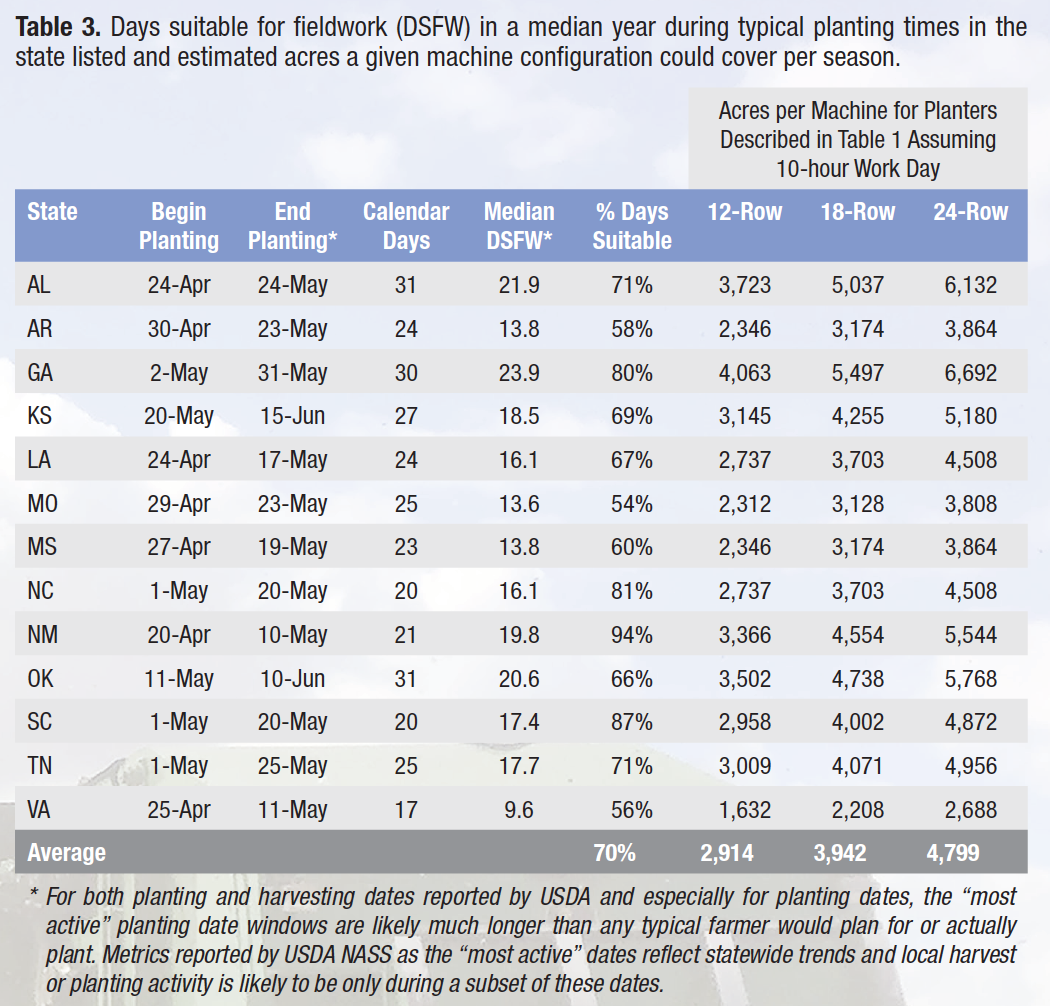 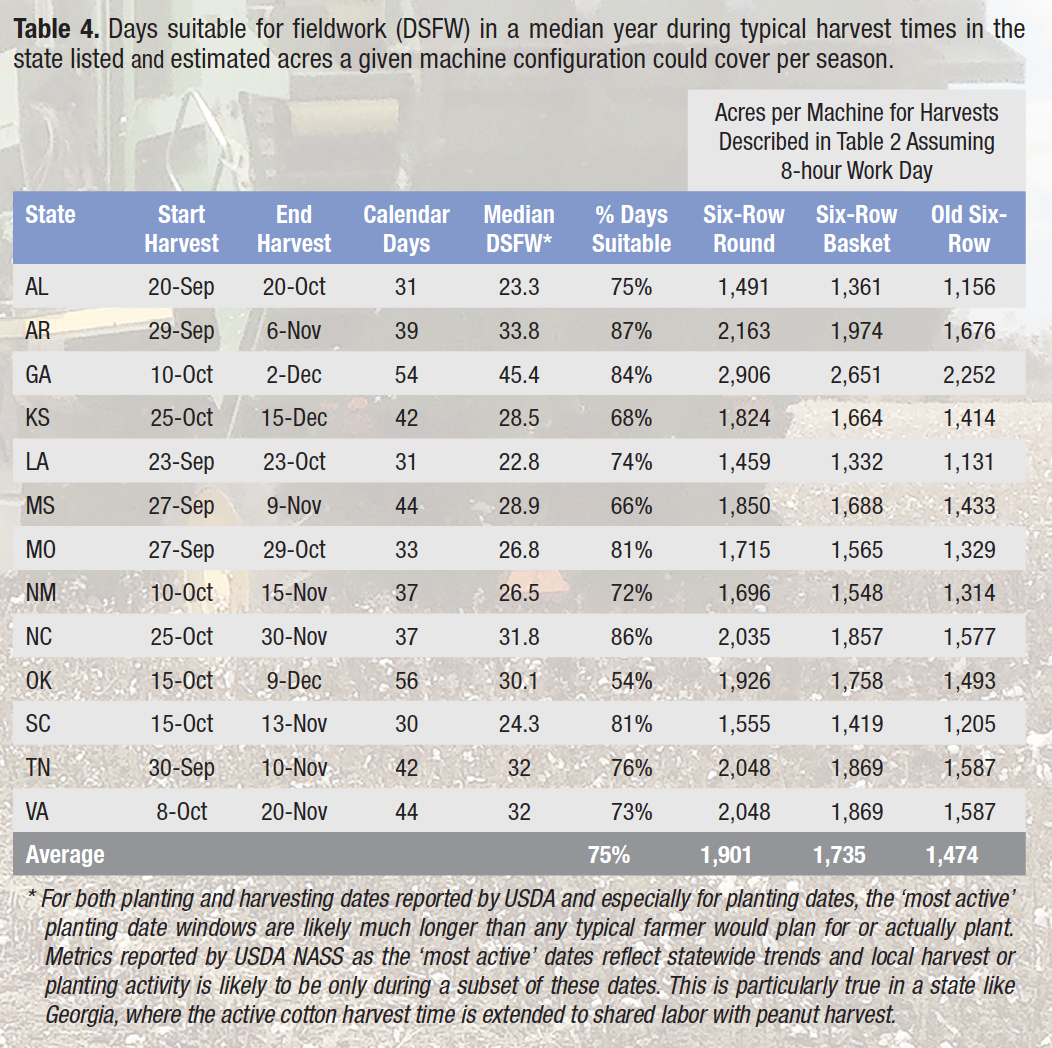 Note that farms employing higher-capacity equipment are subject to a larger loss of acres in bad weather years. For example, when a day is lost with a 24-row planter, 280 acres are not planted as opposed to being 170 acres behind schedule when using a 12-row planter.

These machine capacities are not meant to be exact but should be useful in setting expectations on how many acres can be covered by a given machine in a season.

To view references, go to the website news.utcrops.com and click on “Planting and Harvesting Capacity in Cotton Production.”