Texas Cotton Ginners’ Association (TCGA) members know how to adapt. No matter how unusual the production environment or number of issues, this organization usually finds a way to adjust quickly. Not surprisingly, members had plenty to talk about at TCGA’s Summer Meeting recently at the Barton Creek Resort in Austin, Texas: 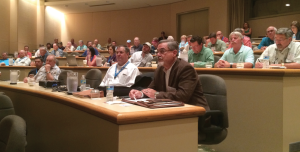 “We certainly discussed a wide range of issues at our meeting,” says TCGA executive vice president Tony Williams. “Our organization is optimistic and hopeful about the size of the crop our farmers can deliver this year – even though we know that some areas couldn’t even plant.”

Crop Potential Looks Good
In one of his reports to the TCGA Board of Directors, Williams presented data that supports the idea that a large cotton crop is possible this year – despite lower planted acreage statewide. The latest USDA crop report pegs cotton acreage in Texas at 5.2 million acres. That is a reduction of one million acres compared to 2014.

However, Williams pointed out to the membership that planted acreage in Texas was 4.9 million acres in 2007. Harvested acres amounted to 4.7 million acres that year, resulting in a total yield of 8.2 million bales.

That wound up being the second largest Texas cotton crop in history, and it was accomplished on fewer than five million planted acres.

“That tells me that there is a lot of potential for an excellent crop this year,” says Williams. 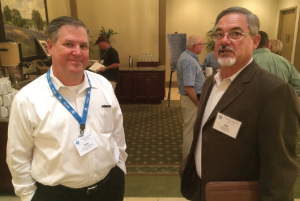 Tony Williams and new TCGA president Ken Ross planned an effective program for the membership. “We are hoping our farmers can have excellent conditions for finishing out this cotton crop,” Williams says.

The program agenda for committee meetings and the general session was busy, but Williams says the mood was positive – despite new issues facing the organization.

Williams says the main business of TCGA for the next few months will be devoted to district and safety meetings, as well as updating the organization’s Red Book, which maintains a current listing for all TCGA member gins.

“We’ll have a busy summer and fall ahead of us,” says Williams. “But, generally speaking, I feel good about what we accomplished at our summer meeting. We are dealing with our problems head-on. Mainly, though, we hope our farmers can have excellent conditions for finishing this cotton crop.”