Ginner of the Year: Barry Street 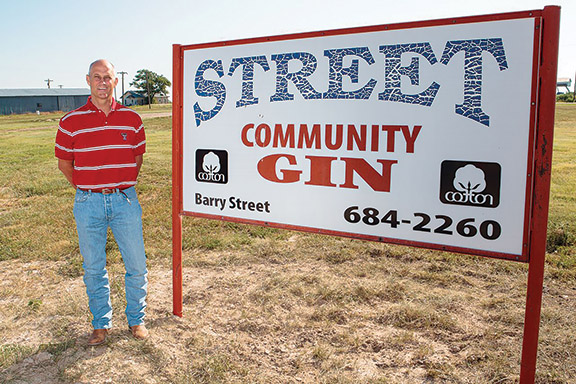 Barry Street, who has been in the ginning business since 1988, is the recipient of the 2015 Ginner of the Year award.

Barry Street grew up on a cotton farm in Kress, Texas, 60 miles north of Lubbock. In 1979, he and his wife, SuDe, graduated from Texas Tech University and decided to return to the family operation. Little did they know at the time that less than 10 years later, they would purchase a local, independent gin. Street was hesi­tant at first, but after he and SuDe discussed it, they decided buying the gin would be a good opportunity.

Today, Street Gin processes an average of 30,000 bales. In addition to running the gin, Street, along with his wife and his son, Chase, has continued to raise cotton, wheat and cattle. During ginning season, Chase oversees harvest, while SuDe lends support, runs for parts and takes care of any other “leg work” that is required to keep the operation running smoothly.

While recovering from knee surgery in February, Street received a call from TCGA Executive Vice President Tony Williams telling him that he had been selected as Ginner of the Year.

“I was certainly caught off guard,” Street says. “All I could think about was how many good ginners we have here in the state of Texas. My first thought was, ‘I am not worthy.’ I am humbled and grateful to be part of an industry in which someone can be recognized for this type of achievement.”

Street credits much of his success as a ginner to his wife, who patiently endures the long hours of not seeing her husband much during ginning season, and his employees, who always bring their “A” game to the workplace.

“From October to the middle of January, we typically run two crews from 7 to 7,” he says. “I arrive at the gin at 5:30 in the morning before the day crew gets in. You would think that after a long day, you would go home when the night crew shows up, but that’s not how it works. I don’t get home until 11 p.m. or 12 midnight, then I am back out at the gin the next morning.”

Street says one big factor that influenced his decision to buy the gin in 1988 was that it came with two seasoned ginners — Jesse Munoz and Sammy Zarate. Munoz, who has since retired, began working there in 1962. Zarate came on board in 1967.

“In 1988, I knew how to raise cotton, but these men taught me how to run a gin,” he says. “After Jesse retired, we hired Zack Trevino seven years ago. He attended the Ginner Schools and has learned a lot from Sammy’s experience and is knowledgeable about the newer technology. And our ginner’s assistant, Lazaro Morales, has been here for 15 years and helps keep things in top shape.

“I also appreciate Velma Hartzog – my secretary who has been here since Day One and knows my business better than I do.”

Like many gins, customer service is paramount, Street says. “With my farming background, I feel that I know what a producer needs from a gin. The most important thing is timeliness in getting the cotton out of the field, ginned and sold. Ninety-nine percent of my customers rely on me to sell their cotton to the different merchants. We always try to get the best price that we can for them. They also expect me to keep up with the varieties and recommend which ones to plant in different scenarios. My son and I plant our own test plots to determine which varieties work best.”

In addition to these services, the gin takes care of collecting the loan deficiency payments and passes them on to the farmers.

The independent gin that Street and his wife bought in 1988 had been built in the 1960s. Through the years, it has been updated with new or better equipment. Street installed a Lummus press about three years ago and a Kimbell module feeder. “We are gearing up to gin round bales for the first time this year,” he says. “The round-bale strippers are just becoming available to our farmers here. This is not a picker area. We use stripper harvesters.”

Street also is working with Samuel Jackson to incorporate computerized drying and moisture-measuring equipment. This technology reads the level of moisture in the bale, so the ginner can determine whether to add more moisture before the bale has been pressed.

One of the best and least expensive technologies he has installed, he says, is the Argus Infrared Spark Detector that helps eliminate fires in the gin. “Gin stands are particularly susceptible to fires, which leads to down time in the gin. We’ve installed Argus in eight locations around the gin, such as behind the gin stand, in the pipes going to the mote press, in the incoming line from the module feeder and in the pipes com­ing out of the stick machines,” he says. “This technology can detect the most minute spark, which provides a safer environ­ment for our employees and saves us a lot of money by protecting the equipment from fire damage. It’s pretty amazing.”

Many factors contribute to the success of a ginning oper­ation, including family support, dedicated employees, new technology and participating in industry organizations, includ­ing TCGA. “The TCGA staff — Tony Williams, Kelley Green and Aaron Nelsen — help us with per­mitting and keep us updated on all the issues that affect the industry. They do a great job.”

For Street, another important key to success is his loyal customer base.

“What I really bought in 1988 was much more than a building full of equip­ment. It was this community of cotton farmers, including my dad, Billy Street, and my uncle, Dale Street. They were called the Street Brothers and farmed in this area for 45 years. They taught me how to farm and instilled in me a love for farming that carried over into the ginning business. Before they retired in 1998, they were two of my biggest cus­tomers for 10 years.

“Even after he ‘retired,’ my dad worked for me for 12 years. He drove a cotton stripper until he was 80 years old. When Chase joined the operation, he put dad out of the stripper-driving busi­ness and took over the harvest duties so I could devote my time to the gin.

“At the end of the day, I realize that the success of a gin is not measured by how nice it is. What matters the most are the people who trust you and want to do business with you. To me, that is the meaning of success.”

It is a pleasure to congratulate Barry Street as the 2015 Ginner of the Year. For more information, visit our website at www.tcga.org.