A Funny Thing Happened On The Way To Cotton’s Demise: It Changed

[toggle title=”Learn More About Guest Contributor Robert Antoshak” state=”close” ]As Managing Director of Olah Inc., Mr. Antoshak supervises the firm’s global cotton marketing and consulting programs. He also directs global marketing, branding and licensing programs for Bayer CropScience. Mr. Antoshak has more than 30 years of experience in the fiber and textile industries. He has held analyst positions with the Fiber Economics Bureau as editor of the Fiber Organon, American Fiber Manufacturers Association as Director of International Trade, American Textile Manufacturers as Associate Director of International Trade, Trade Resources, Inc., as President, Werner International as Vice President. Most recently Mr. Antoshak was Managing Director of the Fibers & Textiles Division of FCStone, LLC. In addition to an extensive background in textile market research, strategic planning and forecasting, Mr. Antoshak has strong experience in trade negotiations and worked as a FBI-cleared industry advisor to the U.S. government on numerous bilateral quota trade agreements, NAFTA, the MFA and the WTO.[/toggle]

There’s been a lot of negative talk lately about cotton: how it’s lost its mojo and fallen out favor with consumers. In today’s market, cotton is challenged in significant ways as it has to compete with an oversupply of synthetic fibers, a fast evolving textile supply chain, and changing consumer attitudes toward natural fibers. Of course, cotton always has to contend with weather, insects, weeds, and other growing problems; farmers year in and year out face such production challenges. Even so, there’s always the demand of the market that ultimately tells the story of the success or failure of a product. Over the past few years, it seems as though the textile supply chain and consumers prefer synthetics. Cotton has lost market share.

I’ve written several critical commentaries about the cotton business in various publications over the past few months. Much of my concern has centered on the lack of focus on the part of the industry to address inroads made by synthetics. Further, there’s confusion in the market over cotton’s message. The frankly fallacious campaign conducted by proponents of “green” production (at the expense of traditional growing practices) has only helped to undermine the benefits of cotton. However, I’d like to suggest that the opposite is beginning to happen: cotton has shown remarkable resilience in the face of an otherwise dour market. 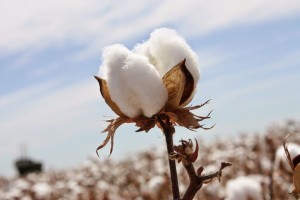 Let me explain. For many years, U.S. exports of cotton struggled to find a consistent presence in the global market. Traditional U.S. cotton – that is, cotton typically produced in the Southeast, short staple, of standard- or low-quality – filled the needs of domestic open-end spinners. However, as that industry collapsed, sales to more competitive overseas mills fell as well. The first decade of this century was tough for many growers, as they not only lost much of their traditional customer base, but also lost much of the overseas market at the same time. Lack of demand for traditional U.S. cotton resulted in a series of smaller crops. Some farmers stayed with cotton, but many fled to other more profitable crops such as corn and soybeans. Despite the dismal market for cotton at the time, something unexpected happened: new varieties of cotton were developed to meet the demand of overseas mills.

The nature of the global textile industry has changed. Since the 1990s, high-speed open-end spinning was all the rage around the world, particularly in the Western Hemisphere and Europe. The technology allowed mills to produce decent yarns in vast quantities using only standard (meaning cheaper) varieties of cotton. But as the textile industries in those regions gave way to competition from Asia and elsewhere, older, slower spinning technologies found their way back into vogue. Lower labor costs helped to bring back ring spinning to produce high-quality yarns. Indeed, the industry in China, India, and South Asia, specifically, adopted ring spinning as a preferred means of production. With the use of that production, the demand for better quality cotton emerged. By its very nature, ring spinning requires stronger cotton, along with a longer staple, to reduce breakage while spinning yarns.

The result was increasing demand for quality cotton around the world – including production in Africa, Australia, China, and the United States. In fact, in the case of the United States, a whole new classification of cotton developed in Texas, the Southwest, and parts of the Southeast. You may have heard of FiberMax® or PhytoGen®, for example, and such production gave ring spinners longer, stronger fiber but with significant attribute: cost competitiveness. Such production was not Pima, for sure, but this production did compete directly with varieties of cotton just below the quality standards of Pima, in particular California Acala. Indeed, Texas production soared to dominate domestic cotton production while California farmers shifted to other crops. Such cotton is often referred to as “quality upland” cotton and makes up a significant portion of U.S. cotton exports. 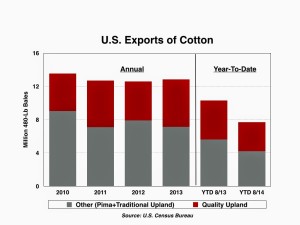 As has been widely reported, U.S. cotton production suffered from drought and other weather-related problems over the past few years resulting in a smaller crop. Ironically, these smaller crops followed price spikes in 2007 and 2008. This combination of factors helped to steer mills and apparel companies toward synthetics, which not only enjoyed price advantages but a more consistent supply of the product. More recently, however, the largest importer of U.S. cotton, China, pulled back on its imports for a number of reasons. First, China cut back on imports due to large warehouse supplies purchased in previous years. Second, the government reoriented grower policies to favor food crops. Third, textile capacity sifted out of China into other countries to help offset rising labor and production rates. Moreover, China’s reduced importation of foreign cotton began to affect adversely U.S. exports beginning on 2013, only to become more severe in 2014. While China cut back on its imports of cotton from the U.S. and elsewhere, other textile-producing countries stepped in to fill some of the void. Significantly, this shift is most apparent in U.S. exports of quality upland cotton. In fact, were it not for quality upland, the overall decline in U.S. cotton exports would have been far worse than it is even now. It is a bright spot in an otherwise gloomy picture. 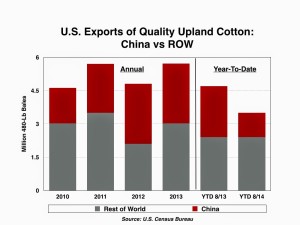 There’s more. When we take prices into consideration, the results are striking. The U.S. dollar has been strong this year, so prices paid at by mills have gone up for all varieties. Hence, quality upland maintains its market outside of China even thought prices are up for the year. Some of you may ask: aren’t futures prices for cotton are down? That’s true, but the prices quoted in the Census data are based on real prices charged in the past. Futures prices, on the other hand, are just that: they are prices for delivery in the future and do not take currency fluctuations into consideration. 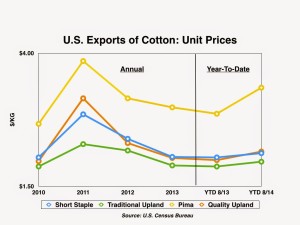 Then there are the countries most responsible for the export results. The top 12 export destinations (countries that make up at least 1% of U.S. exports) for quality upland cotton amounted to nearly 95% of total world exports, which makes the market somewhat concentrated. So only about 5% of exports are shipped to the rest of the world. For the time being, China will not be active in the world markets as a major buyer of foreign cotton, at least at the levels in which the world has become accustomed. So any trade analysis should compare China to all other buying countries. So, if we exclude China, which accounts for about a third of U.S. quality upland cotton exports, the next 11 largest export markets comprise more than 60% of world exports. For sourcing executives, it’s a familiar list of countries. After China, the largest market so far in 2014 is Turkey, followed by Vietnam, Indonesia, Korea, Thailand, Peru Taiwan, Bangladesh, Pakistan, India, and Mexico. Indeed, eight of these 11 countries have imported more quality upland cotton this year than last. These countries represent some of the major producers of cotton textiles and apparel, with huge exports to the U.S. and E.U. It is a significant correlation. What will be interesting to see is if China reenters the global markets for cotton later this year after the U.S. harvest. If China reenters the global market for quality upland cotton, then for fortunes for U.S. exports will improve dramatically.

I’d like to suggest we’re entering an age of “New Cotton.” Better quality and improved performance have become very important to mills and brands around the world. Certainly, price will always be important for any company, but demand for quality cotton has bucked the downward trend in cotton in general. Although my analysis has highlighted U.S. quality upland, there are competing varieties of cotton in China, India, Brazil, Australia, West Africa, and elsewhere. These origins have also enjoyed strong growth in an otherwise depressed market; further evidence that quality sells. For a mill or an apparel brand, quality raw materials can help to differentiate their products in a crowded and price-sensitive market. Not only will better raw materials help a company to produce better quality fabrics, shirts or pants, but it also will help to lower the cost of production of those products resulting from improved spinning efficiencies.

You may know the expression: “garbage in, garbage out.” I feel that the cotton industry has an answer for that: “quality cotton in, quality textiles out.”

Notes: For this analysis, the following Schedule B classifications were used to tabulate U.S. exports of various types of cotton. The list provides the Schedule B number, followed by a summary description, and then a detailed description as provided by the Census Bureau:

COTTON; NOT CARDED OR COMBED: HAVING A STAPLE LENGTH UNDER 25.4 MM (1 INCH) OTHER THAN HARSH OR ROUGH

COTTON NOT CARDED OR COMBED, HAVING A STAPLE LENGTH 28.58 MM (1 1/8 INCHES) OR MORE, EXCEPT AMERICAN PIMA

Source: U.S. Bureau of the Census, Schedule B classification system.