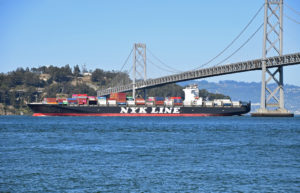 Despite mounting calls for federal maritime regulators to address congestion, delays and shipping challenges at U.S. ports, California agricultural exporters say they have yet to see any relief.

Since last fall, the Pacific Merchant Shipping Association has reported a surge in cargo volumes that has kept shipping containers sitting longer at California ports. With a reduced port workforce due to the pandemic and related slowdowns, exporters say bottlenecks have held up California agricultural shipments—leading to canceled bookings, increased costs and concerns about lost export business.

Because unloading and reloading ships takes much longer and export companies in Asia urgently need containers to ship more goods to the U.S., shipping lines have reportedly been leaving U.S. ports more often without refilling empty containers with American products, including declining to take agricultural exports.

Peter Schneider, president of Fresno-based TGS Logistics, said this is because ocean carriers can now be paid up to $10,000 for a container shipped from China to the U.S., whereas export cargo of U.S. agricultural commodities such as cotton fetches roughly $200 to $600.

In addition to a shortage of containers and equipment to move products onto ships, Zion said some freight rates have doubled.

Even if he can get a booking, he said, ships will either be delayed or the carrier will outright deny a container, with some ships bypassing ports with no notification. The product then sits at the port incurring detention and demurrage fees, “adding insult to injury,” he added.

Because of the delays, Zion said, inland trucking charges to and from ports have soared. He said the company has been absorbing the increased costs, because they were not originally factored into contracts with buyers.

Some exporters say they’ve heard port slowdowns may ease by mid-April or May. Zion said delays might last until June or July.

Schneider, whose company handles a variety of agricultural exports, said he expects delays to continue the rest of the year.

“My crystal ball tells me that it’s going to get better, but it’s not going to get where it was,” he said. “We’re going to have a new norm that’s not the best.”

Charlie Devers, a sales representative for Porterville Citrus in Terra Bella, said he’s been dealing with “a logistical nightmare” since the start of the citrus export season in late November—hearing complaints from overseas customers about not getting fruit, working into the night with his transportation division trying to get containers and contending with long wait times.

Congestion at the Port of Long Beach is so bad, he said, that there have been times when more than 60 vessels sat idle in the ocean, waiting to anchor.

Because he ships a perishable product, Devers said the company is being charged about $100 a day per container to have it refrigerated at the port. With delays averaging 10 to 14 days, he said his customers report more spoilage when they do receive their shipments; some pay extra to send pallets by air.

“It’s a constant battle, and it’s not getting any better. If anything, this thing’s gotten a lot worse,” he said, noting March remains the busiest month for exports in the citrus business.

What’s frustrating, he said, is that there’s “huge demand” for California citrus fruit, especially in foreign markets such as Korea and Japan. But with current port conditions, he estimated he’s exporting about 20% less fruit this season, which means more is being redirected to the domestic market, driving down prices.

For Tulare County citrus farmer Matt Watkins, port delays have affected harvesting of the crop. Though some of it can be stored on the tree, it will need to come off as harvest season moves into the warmer months, he said.

The delays have meant rearranging harvest schedules and sometimes slowing the process, due to more fruit remaining in cold storage that needs to be shipped.

“You’re losing export opportunities,” Watkins said. “In a large citrus crop year, it’s not the best thing to be happening.”

Port problems have “definitely slowed cotton exports,” said Roger Isom, president and CEO of the California Cotton Ginners and Growers Association, noting companies are incurring $10,000 to $30,000 a month in various charges due to delays. Some bookings have been canceled as many as 10 times, he said.

“What we’re really concerned about now is the delays are so long that (customers) are just going to get tired of waiting for it and move to another country or some other supplier for their cotton,” Isom said.

At Sierra Valley Almonds in Madera, two- to three-week delays on almost every export shipment mean storage fees and chassis rental charges can reach $1,500 to $3,000, according to sales and shipping manager Jessica Lawrence—leaving no margin for profit.

With slowdowns being “the new normal,” she said she now tells her customers to expect their shipments to arrive three weeks later. She said the company is refocusing its sales efforts on markets that don’t require ocean shipment, such as Canada, Mexico and the U.S.

An exporter of California rice, Chris Crutchfield, president and CEO of American Commodity Co. in Williams, said the costs to move cargo have gone up “dramatically—many times in excess of 100% on the freight side.” Inability to ship rice in a timely and efficient manner would tarnish the reputation of California as “the utmost reliable supplier of rice in the world,” he said.

“It’s not sustainable over a long term, and we do need some help from our regulatory bodies,” he said.

Crutchfield called on the Federal Maritime Commission to tell carriers they have a responsibility under federal law to treat exports and imports equitably.

The commission has an open investigation on U.S. port congestion, including practices related to detention and demurrage charges and container return practices. But Crutchfield said this process takes time, and until the investigation concludes and recommendations are made, “you’re not going to see any relief.”

Ching Lee is an assistant editor of Ag Alert. She may be contacted at clee@cfbf.com. This article first appeared in the California Farm Bureau’s weekly newspaper, Ag Alert.