Wheeler and Perdue Outline Proposal That Would Bring Certainty to Farmers, Business Owners and the American Public. 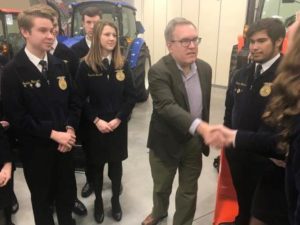 Four hundred Tennessee farmers, ranchers, small business owners and other stakeholders came to the Wilson County Exposition Center in Lebanon, Tennessee, recently to hear Acting Environmental Protection Agency Administrator Andrew Wheeler highlight the new Trump Administration proposal redefining the “waters of the United States”  – and they were happy with what they heard.

Wheeler told the crowd that the main driver behind the new proposal was to create certainty for the American people.

“One goal of our new proposed definition is to help landowners understand whether a project on their property will require a federal permit or not without having to hire outside professionals,” he says. “Our proposal would replace the Obama EPA’s 2015 definition with one that respects the limits of the Clean Water Act and provides Tennessee and its landowners the certainty they need to manage their natural resources and grow their local economies.”

Wheeler was joined by representatives from the Army Corps of Engineers and U.S. Department of Agriculture. Secretary of Agriculture Sonny Perdue, who has long fought for the repeal of the 2015 Obama Administration WOTUS rule. Perdue hailed the redefinition proposal that clarifies federal authority under the Clean Water Act as a positive achievement for American agriculture.

“When I meet with the men and women of American agriculture, one of their chief concerns is always the overreach of federal regulations. The 2015 WOTUS rule is regularly singled out as particularly egregious, as landowners have told me it impedes the use of their own land and stifles productivity,” he says. “Farmers and ranchers are exceptional stewards of the environment, and states have their own standards as well.

“This welcome action from the EPA and Army Corps will help bring clarity to Clean Water Act regulations and help farmers know where federal jurisdiction begins and ends. President Trump is making good on his promise to reduce burdensome regulations to free our producers to do what they do best – feed, fuel, and clothe this nation and the world.”

Unlike the Obama Administration’s 2015 definition of WOTUS, the Trump proposal contains a straightforward definition that would result in significant cost savings, protect the nation’s navigable waters, help sustain economic growth and reduce barriers to business development, they told the crowd.

Among those speaking at the event was American Farm Bureau Federation President Zippy Duvall, who said, “Farmers and ranchers work every day to protect our nation’s waterways and drinking water.

“For more than five years we have advocated for a new water rule that protects clean water and provides clear rules for people and communities to follow. This new rule will empower farmers and ranchers to comply with the law, protect our water resources and productively work their land without having to hire an army of lawyers and consultants.”

The proposal, which is co-signed by the Army, is the second step in a two-step process to review and revise the definition of WOTUS consistent with Trump’s February 2017 Executive Order titled, “Restoring the Rule of Law, Federalism, and Economic Growth by Reviewing the ‘Waters of the United States’ Rule.”

The executive order states that it is in the national interest to ensure that the nation’s navigable waters are kept free from pollution, while at the same time promoting economic growth, minimizing regulatory uncertainty, and showing due regard for the roles of Congress and the states under the Constitution.

Once the proposed changes are published in the Federal Register, the public will have 60 days to submit comments.

The Environmental Protection Agency provided information for this article.