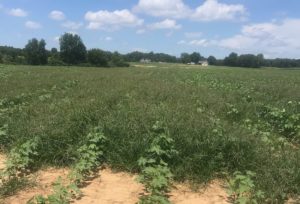 Clearly, after all the struggles in 2019 controlling grass weeds, many are looking to change their weed management program. The most frequent question recently has been on the best preemergent options to more account for barnyardgrass, jungle rice and goosegrass.

In an attempt to do a better job on grass, most have decided to move from the traditional Cotoran and/or Caparol. Instead, many are trying to decide if herbicides such as Brake, Dual Magnum, Prowl H20 or Warrant would be a better fit for their cotton.

Prowl H2O is by far the herbicide many have decided to go with to help improve their grass control. I believe this is a good option as well. Unfortunately, shortages have been reported, and it will not be an option for some. If you are able to use Prowl H20, please consider using at least a low rate of Cotoran to help with the Palmer control. The Treflan/Prowl-resistant Palmer amaranth identified by Dr. G. Neil Rhodes in the late 1990s is still present in some fields, and Cotoran will help here.

Another good option is Brake. In our research, a tankmix of Brake and Cotoran can provide good grass control. Remember Brake needs a good ½ inch of rainfall to become activated. As such, it would often work more consistently applied with the burndown early preplant where it would be more likely to catch a rain than pre-applied.

Another caveat with Brake is that for soils with higher clay content, that 16 ounce per acre rate is too low. Even bumping up to 24 ounces per acre maybe not enough, depending upon the clay content of the soil and the weed pressure.

Dual Magnum and Warrant are also labeled options. Dual Magnum will provide the most consistent grass control in most situations. The exception to this would be in a cover crop where in our research Warrant often provides better residual control.

Of all the herbicides mentioned, these two would have the highest probability of harming stand when used as a pre. This can be mitigated to some extent by using a split-shot approach where one-half to two-thirds of the full rate is applied pre, and the rest early postemergence around the typical thrips application window (one to two leaf).