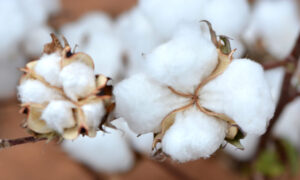 Texas cotton producers could have a tough year due to drought, but good prices are likely to soften the blow, according to a Texas A&M AgriLife Extension Service expert.

Robinson said cotton prices have recovered from a deep slide due to COVID-19. The pandemic recession sent cotton into a spiral as demand for cotton plummeted in April 2020.

Cotton prices bottomed on April 1 last year but began climbing back, in large part due to China purchasing large amounts of U.S. cotton to build up their reserves when prices cratered. The purchases provided cotton with a bump, but prices gained momentum as mills around the world ramped up production this year.

“It was an astounding rally,” he said. “Mills around the world from Asia to Turkey ramped up production and bought a lot of U.S. cotton, and the resumption of demand fed upward prices.”

The market has corrected since, and prices settled in the low- to mid-80 cents per pound range, which is still a good price for producers, he said.

Prices may have recovered, but the opportunity for Texas cotton producers will depend on Mother Nature.

Robinson said the state’s cotton growing regions, from the Panhandle down to the Rio Grande Valley, are experiencing drought at levels that threaten yield potential in both irrigated and dryland fields. And forecasts are calling for drier- and hotter-than-normal weather through May, and then normally hot weather after that. Irrigation would likely not support the crop without rainfall because the moisture deficit is too high.

Irrigation in areas like Far West Texas and the Rio Grande Valley may be limited this season due to rationing by water districts. Furthermore, areas like the South Plains and Panhandle may find irrigation difficult due to water demand and high energy costs.

But that may not dissuade producers from putting seed in the ground because crop insurance prices for lint were at 83 cents based on the recent price surge. The high insurance price cuts both ways. While implying a better safety net against losses, it also raises the value of the coverage, leading to higher insurance premiums paid by farmers.

“It’s one of those years where the possibility of crop failure might lead to more cotton plantings, since cotton performs better agronomically than grain crops in dry conditions,” he said. “It’s still a risk for producers because these dry plantings could get rain and then they have to follow up with weed control and more inputs and end up playing catch-up.”

Producers are also likely to pay more for inputs from fertilizer, seed and herbicides to around-the-clock electricity that runs water pumps and drives irrigation pivots, he said.

Robinson said U.S. cotton producers were expected to plant 12 million acres this season, as of the U.S. Department of Agriculture’s March 31 estimate. Texas likely will account for 6 million of those acres, and it could climb by several hundred thousand acres due to good market and insurance prices.

High grain prices may have changed some producer’s minds, but the final decision will depend on how producers invested preparation dollars. But even with the high number of acres, Robinson said the cotton supplies will likely be tight after this season due to drought, international demand and low carryover stocks from last season.

Robinson doesn’t expect more than 16 million bales of U.S. production in 2021, which he said would support good prices into summer and could push them further upward if crop abandonment numbers are high throughout the cotton-producing southwest U.S.

Additional uncertainty surrounds an ongoing geopolitical problem unfolding with China, as retailers have begun boycotting cotton produced in the Xinjiang province because of the nation’s treatment of the Uyghur population. Xinjiang produces 85% of Chinese cotton, and it is unclear whether the boycotts will help U.S. cotton or spiral into another trade war.

“There is above-average uncertainty this season,” Robinson said. “The stories to follow will be drought and the economic recovery and whether it continues to remove some of the hesitation Americans have when it comes to discretionary spending. The China situation is a wild card.”