Producers Have Many Options For Cotton Varieties In 2014 Season 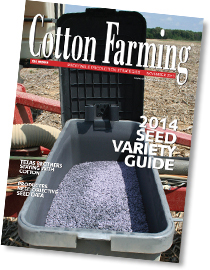 Cotton producers will once again have many options when it comes to choosing cotton varieties in 2014, but that still means a lot of studying will be necessary before a final decision is reached. Gone are the days when a farmer and his consultant could observe a new variety for two or three years and then decide to plant it. In today’s environment where seed companies roll out new varieties nearly every year, it behooves farmers to tap into every source of information.

Fortunately, farmers know the value of on-farm trials where they can see how a new variety will fare on several acres before making that final decision. And they’ll continue to study university Official Variety Trial data as they’ve done for many years.

Here is a quick look at what the major seed companies will offer in 2014:

This Texas-based company was recently purchased by Crop Production Services (CPS) and will offer a wide selection of RR Flex, RR Flex BG2 and conventional varieties.

All of these varieties are picker types with excellent yield and fiber quality potential. Dinero B2RF is another RR Flex BG2 variety that will return to the lineup in 2014.

The company will offer several conventional varieties, including:

Cody Poage, operations manager for All-Tex and Dyna-Gro seed, says CPS’s acquisition of All-Tex is a “win-win situation for all parties.”

“It certainly gives our All-Tex seed brand an expanded presence in the Cotton Belt, and we feel good about that,” he says.

This seed company, which began as a small operation in Texas, continues to offer producers numerous choices in the Lone Star state as well as other areas such as the Mid-South and Southeast.

Seven NexGen varieties will be offered in 2014, including:

Americot will again offer one conventional variety, AM UA48, which was developed by Dr. Fred Bourland at the University of Arkansas and is well suited for the northern cotton areas of the Mid-South and Southeast.

FiberMax will offer 10 varieties in 2014, and all are characterized by high yield potential and good fiber characteristics. The varieties being offered are:

ST 4946GLB2 is an early to medium maturing variety that is broadly adapted across the Belt. It also has root-knot tolerance. ST 6448GLB2 is a full-season variety with improved fiber quality and root-knot nematode tolerance.

Of the 12 varieties that PhytoGen will release for 2014, six are new and include:

The PHY 427 WRF and PHY 417 WRF varieties are root-knot nematode resistant and have high yield potential.

The other PhytoGen varieties that will return to the lineup include:

Deltapine will announce most of its new varieties for 2014 at its New Product Evaluator meeting on Dec. 13-14 in Charleston, S.C. However, the company has already announced that a new Pima variety – DP 360 Pima – will be released next year. Other varieties on the list for commercial release in 2014 include:

Deltapine officials are particularly positive about the release of several of their varieties that are resistant to root-knot nematodes. Another top variety is DP 1044 B2RF, which is the No. 1 planted variety in Texas, according to the USDA-AMS 2012 and 2013 Cotton Varieties Planted Report.

DG 2285 B2RF is broadly adapted across the entire Cotton Belt and is a good fit with better water sources. It also is an early season variety with high yield potential.

DG 2530 B2RF is a medium maturing variety that has the potential for good quality in the Southeast and Delta.

DG 2610 B2RF is a medium-full variety that is adapted for the Deep South and Texas.

The company will again offer five varieties in 2014. They include:

CG 3428 is still considered a new variety because of limited seed supply in 2013.

Several of the varieties are a good fit across the Cotton Belt, including CG 3428 B2RF and CG 3220 B2RF. Meanwhile, CG 3006 B2RF has performed well in the Northern High Plains and Kansas, while CG 3156 B2RF is adapted for areas with limited water.

Hazera Gentics was incorporated in 1999 and is active in more than 60 countries through subsidiaries in Spain, Turkey, Greece, China, Brazil, Mexico and the United States. The company will offer four Pima varieties in 2014:

Two of the varieties – HA690 and HA1432 – offer new opportunities for producers who grow Pima cotton. HA1432 is an indeterminate variety that features four to five lock Pima bolls with high yield potential. HA175 also offers high yield potential and can be used for double cropping.

This Texas-based company, owned by Ed Jungmann and his wife Jane, continues to offer cold-tolerant and conventional varieties to the Cotton Belt. Seven varieties will again be offered in 2014.