July 1, 2020
Facebook
Twitter
Linkedin
Email
Print
When a human or an animal gets sick or is stressed, their temperatures can go up. The same is true for plants.

A researcher with Texas Tech’s College of Agricultural Sciences and Natural Resources is using drones to detect crop growth conditions in agricultural fields, with temperature variation being one of the ways scientists can see if there is a problem.

Wenxuan Guo, an assistant professor of crop ecophysiology and precision agriculture with Tech’s Department of Plant and Soil Science, is using drones that measure about 6 feet wide. They can carry up to 20 pounds of payload such as thermal, hyperspectral and multispectral sensors, which can measure or determine temperature, plant count, height, leaf area, canopy cover and plant maturity.

“Mostly we use the drones for remote sensing. We mount some sensors on the drone so that we can view cotton or other plants during the growing season,” said Guo, who also holds a joint appointment with Texas AgriLife Research. “We apply sensors to detect plant canopy temperature as an indicator of the stress conditions, especially water stress. It’s just like human beings: If we have a fever, we are in stress.”

At Texas Tech, most of Guo’s research focuses on improving cotton production, but he said most of his research related to remote sensing could be applied to other crops because the principles are the same. 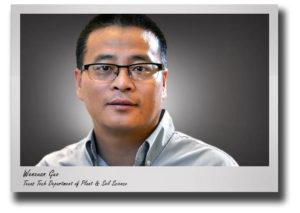 “Cotton is king in West Texas. Therefore, cotton is naturally the No. 1 research target in this area. Because water is the top limiting factor in crop production, we have to improve water use efficiency and conserve water for sustainable production,” Guo said.

He said in many fields, perhaps 20% to 30% of the field just doesn’t yield as much as the rest of the field. It could be that the soil is too shallow and has low fertility or the water is running off due to a high slope in that area before it has a chance to be absorbed by the soil for plant growth.

By using drones to monitor the crops, Guo can determine if plants in a particular area of a field are stressed. He said sometimes the temperature of a certain area can be as much as 10 degrees Celsius more than the rest of the field.

“This technology has huge potential, because if we can identify the temperature differences, we can detect the stress levels. Then we can make decisions about what to do with those stressed areas site-specifically,” he said.

Farmers can make choices about whether to adjust input levels in certain parts of their fields if those areas typically underperform, Guo said. They could focus their water resource on the areas of the field that are more productive for a higher profit.

As irrigation water supply dwindles in West Texas, he said farmers can use technology to use less water to produce the same or more crops.

“We have to think how to more wisely use our resources, especially water. If we apply water and nitrogen more than needed, there could be environmental concerns,” Guo said. “We have to think about how to lower the input, so that we can still maintain or improve agricultural production. That’s one of the goals in precision agricultural production.”

Questions from Tiffany’s Desk: What Statutory Protections Apply if Hunters Are Injured on My Land?