As we near early August, cotton growers should be shifting their focus from early season insects to late season pests that arrive after bloom, particularly bollworms and stink bugs. Bollworms have been a persistent pest of cotton over the last few years, a trend that has been driven by increasing resistance to Bt toxins used in cotton and corn.

While the acreage of 3 toxin cotton (Bollgard 3, TwinLink Plus, Widestrike 3) continues to increase across the state, we still have some 2 toxin cotton out there. In 2020, the U.S. Department of Agriculture estimated that North Carolina growers planted approximately 30% of the crop to two-toxin varieties with about 70% of the crop planted to three-toxin varieties (USDA AMS 2020).

Although we expect that three-toxin cotton will have minimal injury from bollworms, it will be very important to continue scouting the crop to ensure unexpected injury does not occur. In a previous article, we cover thresholds needed for bollworm management in 2021 depending on the type of Bt expressed in the variety (article link: Additional Threshold for Bollworm Added This Year).

Although there is no good substitute for scouting your fields, we are often asked what kind of bollworm pressure to expect. This is a tough question and the answer is unsatisfying. Currently, we cannot predict the size of bollworm flights during the season. 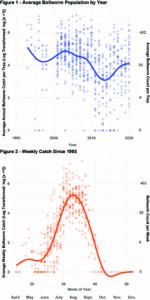 To improve our understanding of North Caronorth carlina bollworm populations, we compiled all of the NC Black Light Trap data collected since 1993. Unfortunately, the significant variation among years and traps make predictions complicated (Figure 1).

In addition, state trap catches don’t always relate to pressure in our crops. For example, 2010 and 2011 were significant bollworm years that aren’t outliers in the trap data in Figure 1. This mismatch between trap counts and pressure is likely explained by a combination of factors such as weather events, long-distance flight into the state, and too few traps set relative to acreage of soybeans and cotton.

Currently, we are working toward an improved strategy to predict the size of populations based on historical trap catches. In the near-term, we can rely on the historical black light data to explain when flights typically occur during the season (Figure 2).

Each year the size of bollworm flights varies, in heavy years we can expect widespread infestations (Figure 1). The second piece of the puzzle is when bollworms fly during the season. Since 1993, the average peak bollworm flight occurred around August 9th (Figure 2). This peak typically corresponds with blooming cotton, which is why this pest is a major challenge every year.

Although long-term data can help us understand general patterns of activity, we do know that year-to-year variation is important. When we look at annual activity patterns, we see lots of differences in population size and activity patterns (Figure 1).

This variation is good motivation to scout cotton each week during blooming. Weekly activity data from the Black Light Trap Network can also provide useful information about when bollworms are flying across the state (2021 trap data available here).