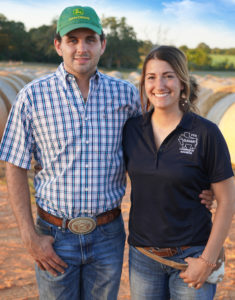 The seeds of a dream tended with much hard work and perseverance have one young couple reaping the rewards. It’s a bountiful harvest for first-generation farmers Braden and Jordan McInnis of Anderson County.

“Farming is never easy, but it can be even more difficult to break into as a first-generation farmer, “TFB President Russell Boening said. “Braden and Jordan are a determined young couple who have made their dreams in agriculture come true, and we’re honoring their dedication with this award.”

Braden began farming in 2009, when he was a sophomore in high school. Since then, his farm has grown.

In addition to helping on the farm, Jordan is the head agricultural science teacher at Elkhart High School.

The McInnises also serve on TFB’s Young Farmer & Rancher Advisory Committee and participate in Farm Bureau activities on the county and state level.

“The Outstanding Young Farmer & Rancher competition recognizes farmers and ranchers between the ages of 18 and 35 for their dedication to Texas agriculture,” Boening said. “This year’s contest highlighted several diverse and innovative operations. These young couples are not only running successful farms and ranches, raising their families and contributing to their communities, but they’re also finding the time to advocate for agriculture and share their stories with consumers. They’re all to be commended.”

As winners of the Outstanding YF&R contest, the McInnises represented Texas in the American Farm Bureau Federation’s Achievement Award competition in January in Austin.

Other finalists in this year’s TFB competition include Matt and Jessica Hanslik of Lavaca County and Jesse and Karri Wieners of Carson County.