Home » Breaking News » Bollworms/acre from corn (or why W. Texas had fewer bollworms this year)

Bollworms/acre from corn (or why W. Texas had fewer bollworms this year) 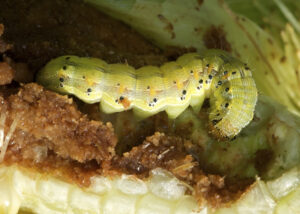 Dr. Suhas Vyavhare and I are conducting a very detailed experiment this year on some aspects of Bt corn. Part of the experiment involves putting 120 emergence cages on the ground under corn after corn earworm larvae (cotton bollworms) have left the corn ears and entered the soil for pupation.

This lets us determine the number of moths being produced per square foot or acre under actual field conditions. After they emerge as moths, these insects will then fly to other crops, and their eggs become the late season bollworm infestations in cotton and headworm infestations in sorghum.

2020 was a fairly light year for corn earworm infestation in corn; only 54% of the ears were infested with larvae at our Olton trial. In most years this would have been nearly 100%.

Here is the math:

My work with the older Bts like Cry1Ab, Cry2Ab2, Cry1F and Cry 1A.105 suggest these Bts are no longer killing as many earworms as they once did, so one could expect them to produce a significant number of moths. Vip3a corn is highly effective at killing corn earworm, so it will not contribute significantly to a moth flight (until we get resistance).

Dr. Pat Porter is a Texas A&M AgriLife Extension entomologist in Region 2. He may be reached at p-porter@tamu.edu