Consumers are driving move to more sustainable cotton in California 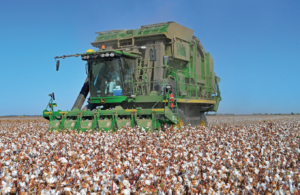 A recording of the three-hour Sept. 17 webinar – which features clothing manufacturers, farmers and scientists – may be viewed on YouTube at https://youtu.be/rEm8pjbbnaE.

At the beginning of the webinar, UC Cooperative Extension conservation agriculture specialist Jeff Mitchell recalled the tragic 1991 dust storm on the west side of Fresno County, which reduced visibility on Interstate 5, causing a 104-vehicle pile-up that took 17 lives. The devastating accident foreshadowed debates about agriculture’s role in reducing dust emissions, he said.

“It turns out that air quality was just the beginning,” Mitchell said. “There is now a whole cascade of expectations that buyers, consumers and the public are demanding of farmers about how food, fiber, feed and fuel crops are actually produced.”

Speakers from non-profit and commercial fashion and fiber organizations said they are anxious to get access to cotton grown using practices that promote soil health and sequester carbon to give their products climate-change mitigation cachet.

“What we envision when we look at the fields is ground cover year-round. Living roots in the soil year-round,” said Rebecca Burgess, director of Fibershed, a California non-profit organization that develops regional and regenerative fiber systems. “No-till or strip-till practices have garnered interest to protect soil from disruption, to avoid breaking up fungal networks. To produce cotton in a system that isn’t eroding top soil.”

Wrangler jeans is a clothing brand that has successfully incorporated sustainably produced cotton into its products. The company worked with a group of Tennessee cotton farmers and the Soil Health Institute to produce 100% sustainable cotton jeans and sell them in its Wrangler Rooted Collection. Men’s jeans in the collection run about $100 a pair. Ordinary cowboy cut Wrangler jeans range from $39 to $41 a pair.

Burgess said the fashion and textile industry is organizing itself to align with the 1.5-degree pathway, a target set by the Intergovernmental Panel on Climate Change that limits the rise in global average temperature to no more than 1.5 degrees Celsius above pre-industrial levels.

“We want to work with farmers to enhance the ecosystem function of the landscape,” Burgess said. “We need to embed the cost of transitions into the cost of the cotton.”

Growing regenerative cotton in California comes with challenges that farmers are facing head on. Firebaugh farmer John Teixeira this year grew a multi-species cover crop that he terminated with a flail mower rather than a herbicide. He is making compost on the farm and in some parts of the farm spreading 8 to 10 tons per acre. 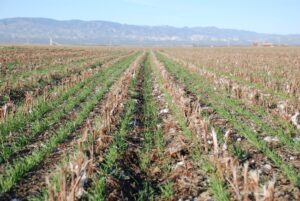 “We spread it on soil and also on cover crops to digest the cover crop,” Teixeria said. “We’re adding bacteria. We would love to have more fungal diversity in the compost, but that’s really hard. Fungi don’t like to be disturbed. I believe microbes are the future. The key is to keep them alive.”

Gary Martin of Pikalok Farming in Firebaugh was using poultry manure on the farm until it became prohibitively expensive. He then turned to cover crops and municipal compost to improve water infiltration, soil structure, water retention and increase organic matter. After three years, he added gypsum to improve the soil health.

He found that planting a cover crop without irrigation is a gamble.

“The net value of the cover crop is negative if it doesn’t grow (because of a lack of rain),” Martin said. “Composting is more of a sure bet.”

“Native plants are designed to grow when we get moisture, and go away when we don’t,” said Bowles Farm Executive Vice President Derek Azevedo. “It could be a habitat for pollinators.”

The company is also working on writing a carbon plan to map out how much carbon a cotton farm in Merced County can capture. The trial is managed with a multi-species cover crop, strip tillage, untreated seeds, fungal-dominated compost inoculation and a reduction in synthetic nitrogen.

“I can tell you already that the results of that carbon plan are being awaited by one of the brands in the San Luis Obispo area,” Burgess said. “They want to work with that cotton. They are excited to know what this can do for the climate.”

Rebecca Daeschner represented the Los Angeles-based luxury women’s wear brand CO (CO-collections.com), which in its current collection sells a ruched cotton top for $725, a cotton button-down shirt for $795 and a short-sleeved cotton dress for $795.

“We’re interested in making products that stand the test of time, stay out of landfills, eliminating waste,” Daeschner said.

The company currently sources its high-end materials mainly from Italy but is interested in transitioning to fabrics that are not only high quality, but also have a reduced environmental footprint. A new line, CO Natural World, focuses on the highest levels of sustainability, organic and regenerative materials, climate-beneficial wools, organic cotton, organic linen and recycled cashmere from garments that can no longer be salvaged.

“To create a garment that goes beyond the very least amount of harm to a garment that actually benefits the planet is the ultimate luxury,” Daeschner said.

The company is part of a network of five clothing brands that are working together to create the California Cotton and Climate Coalition, or C4 Coalition.

“We can do more together than we can do alone to boost the demand for beneficial cotton,” she said. “We are sharing pre-competitive information and pooling our financial resources to overcome existing gaps in the supply chain. And we will share our findings and results to attract new brands to the coalition.”

Calla Rose Ostrander, climate change communicator with the People, Food and Land Foundation, spoke from her home base in Colorado about opportunities for incentives to assist farmers in transitioning to healthy soils practices. She has been working with Maurice Marciano, the founder of Guess Jeans, and his daughter Olivia, who provided funding for part of the Bowles Farm project.

“They want to give back to the cotton community given the legacy of their company,” she said.

Ostrander said there is a network of philanthropic funders who may be interested in supporting the evolution of the cotton production system.

“There’s a lot of commitment out there,” Ostrander said. “We’re all trying to figure out how to do it and make sure that we can support the farmers in this transition. I’m really glad to see that the emphasis has stayed on supporting the producer and this idea has evolved. It takes time to build things.”